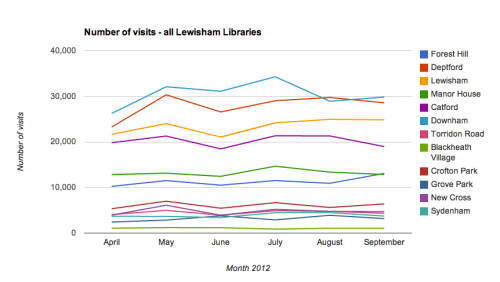 The graph above shows the number of people who visited Lewisham’s various libraries in 2012. The green line at the bottom is the Blackheath community library.

Let’s zoom in a bit, and just look at the community libraries: 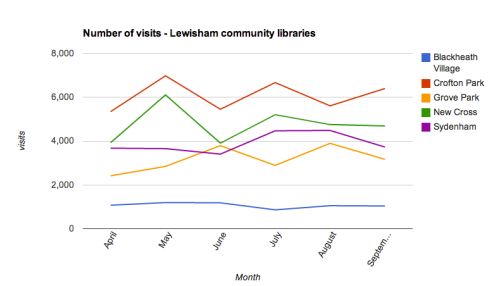 So of all the community libraries in Lewisham, ours gets the fewest visits (and the fewest items issued too incidentally).

But maybe the old library was never very popular either, right? Except that here are the two months of visitors data just before it closed. Look how they compare to the same two months in 2012 for the new library:

For every one person that walks into the current library, more than five people walked into the old one in 2011.

The old library which is now a private school.

I hope the Labour councillors and MP are proud of this achievement. Bravo.

The Bookshop on the Heath has interesting books about Turkey in its windows. Never read The Eunuch of Stamboul, but according to this blog post, looks like an entertaining read. Apparently it was also made into a film in 1936, which can be viewed for free at the BFI’s Mediatheque.

Speaking of Turkey, Blackheath’s dabbling with Turkish food has come to a close. Not a huge surprise given some of the competition nearby. It was never a great place, as many of the reviews here have mentioned. Will Cote be any better?

Look at these two charts, and tell me when you think our library was destroyed. 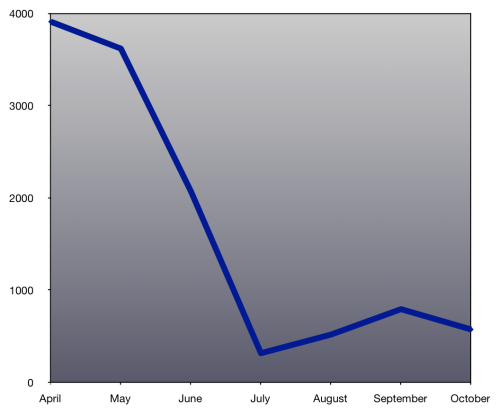 The Age Exchange Library is a joke.

“I didn’t come into civic life to close libraries”, I believe is the familiar refrain. So don’t. Re-open the real library. I don’t care how you do it, find a way. Otherwise you’ve just guaranteed the quickest, most efficient way to dumb down an entire generation. Shame on you vandals.

The data comes from questions by councillor David Britton (a Tory with a slightly scary looking union jack on the blog head), made available by Lewisham councillor Christine Best, the cabinet member with responsibility for libraries, at a council meeting on 29th November:

Including an apology for the crappy numbers:

There have been some initial difficulties with data collection from the Community Libraries, and the Service overall has had a difficult year, completing a major staff reorganization and the introduction of new technologies. The implementation of such major change has had a negative impact on performance, but the Service is confident that both issues and visits will now begin to increase.

Yes, a bit. Maybe. Or perhaps it will just be wound down and closed. 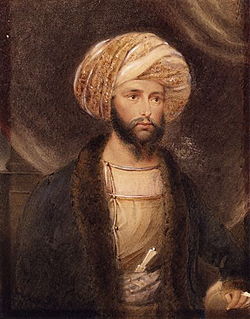 Abbottabad (the city where Bin Laden was killed late last night) has a strong connection with Blackheath. From Neil Rhind

(author of the seminal books about Blackheath):

Bugler – Good morning. Thought your readers would like to know the following before the national press get it wrong.

Abbottabad. in Pakistan, now famous/notorious for being Osama Bin Laden’s place of execution, was named after a Greenwich man: General Sir James Abbott (1807-1896) who was born at No 5 The Paragon. He was one of three illustrious sons of the family of Henry Abbott, navy agent and Calcutta merchant. James was commissioned in the Bengal artillery in 1823; in 1839 he was sent to negotiate a treaty between Khiva and Russia, signing the terms in St Petersburgh, in 1840. He was Commander of the garrison at Hazara, in the Sikh War of 1849-50, and held it so tenaciously that he enjoyed the thanks of both houses of Parliament. Abbottabad was named after him. His memoirs of the Khiva campaign were published in 1843. His brothers, Augustus and Frederick, were also promoted to Major General and were knighted for their services in India and Afghanistan. The Abbott family lived in Blackheath from the 1790s to 1820. Abbottabad “ … a remote city in a valley …” suffered dreadfully in the earthquake in October 2005.

Many thanks to Neil for sending this in. If you live in Blackheath, then buy his books. They’re really, really excellent.

Image above is of Sir James Abbott (from Wikipedia). For more terrorism-related links about Blackheath, you might enjoy the shoe-bomber post, from a little while ago…

UPDATE: Below are two images, showing Abbottabad in the 1860s, and in the present day (also from Wikipedia) (thanks to Michelle!) 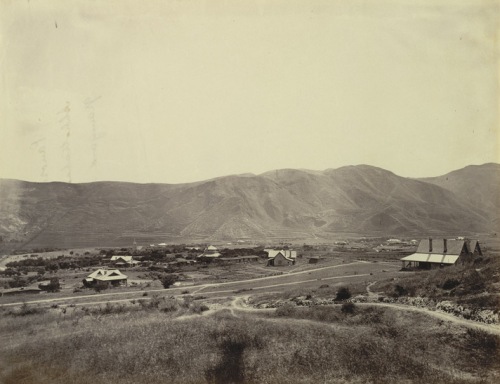 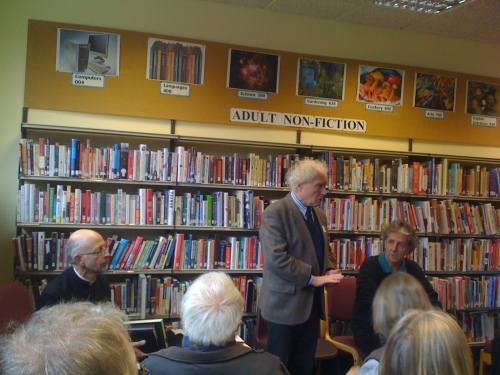 Neil Rhind spoke about the history of libraries in Blackheath, and then revealed that he had popped into the Blackheath Standard library recently, because he needed to check something in his book Blackheath Village and Environs Volume 2

, but couldn’t find it on the shelf. A library assistant informed him that “it’s always out. It’s the most stolen book from our library, after the bible”. He seemed delighted by this!

Here’s an extract from the reading by Blake Morrison, from his book The Justification of Johann Gutenberg

One day in the forest, when he was feeding the birds, he says, “it was as if the dove that perched [on my hand] spreading its wings had become an open book. And the dove departing from me was like a book taking flight. And the grain the dove held in its beak was like a kernel of knowledge seeding itself through the world.”

A very pertinent passage, as the grain is about to be snatched from the beaks of future generations.

Both Blake Morrison and Nicholas Cranfield (the vicar from All Saints Church) emphasised the community aspects of the library. Blake Morrison described what he called “bibliotherapy” – the act of reading with others, as something of great value. He emphasised that when politicians define the needs for cuts across services, they often draw a choice between front-line healthcare services, or library services. He spoke very well about his experiences, and said that library services often actively reduce the need for healthcare, by nurturing people’s minds, reducing their reliance on other services. I guess this sort of symbiotic relationship is hard to prove on a balance sheet, but it certainly chimes with my gut feeling of how a library benefits society. Nicholas Cranfield spoke of libraries as a “civilising force”.

On the downside, there wasn’t enough space for the protest inside the library- they should have held it outside with a PA (maybe they could have borrowed the mic from the crazy morris minor sound-system, or moved the bookshelves to make space for the protestors – the shelves were on wheels, so why not make some space?!

All in all, it was an uplifting experience. I’m just not sure that Lewisham Council was paying attention.

After the testing a couple of weeks back, and two countdowns, the Blackheath Christmas Lights are finally on. Not Nick Ferrari this time – someone called Kevin Bridges, and a fairly gloomy theological analysis from Father Nick, the Christmas Lights finally switched on.

It’s amazing how many people show up in the village to watch some bulbs (LEDs) switch on. In this age of high definition 3D entertainment, you’d think it would get overlooked (Mrs Bugle says it’s a very European phenomenon).

Anyway, they look lovely. The lights over the chipshop parade seemed to be forgotten about, but came on shortly afterwards. The (rather blurry) photos show before and after, but aren’t taken from exactly the same perspective, unfortunately. The Salvation Army were also parping away in a jolly fashion – audio is below.

Meeting tomorrow to Save Blackheath Library 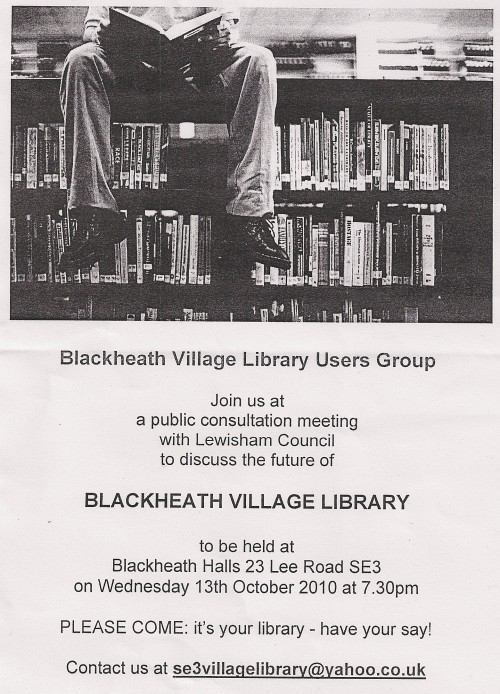 The final meeting that they are holding takes place tomorrow (Wednesday) evening at 7.30pm, in Blackheath Halls. This is a far easier location for people who actually use the library, so please, if you care at all about the library being shut, please come along.

If you’re not grey, where are you? 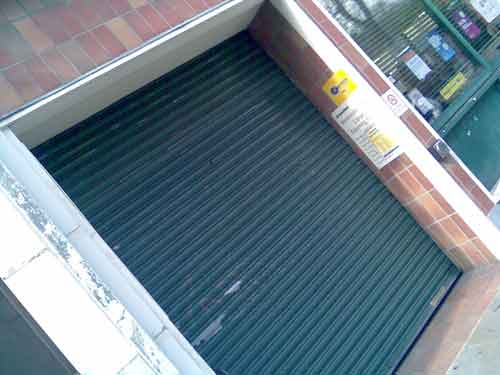 I know that you use the library.. .I’ve seen you! I haven’t felt so young in a while… If you’re a thrusting young professional™, who likes the local library, then where the hell were you? Seriously – that meeting was packed, but barely a soul there was under fifty. Which is fine, but it was a week night – a Tuesday for god’s sake! You can’t all have been at Pilates?! Anyway… Despite the curious demographic slope, the meeting was an interesting affair.

Read on to the full thing, but also, please email se3villagelibrary@yahoo.co.uk to sign up for their newsletters.  I’ve scanned the one from the meeting (PDF file here) – I’ll take it down if anyone objects.
END_OF_DOCUMENT_TOKEN_TO_BE_REPLACED