Age Exchange and the Library

First up was Sir Ian Mills, asking everyone to please use the Bakehouse Library. Apparently it has lots of kids using it, but not enough adults. £800,000 of development work is due to take place by 2015, including grand plans to turn the two upper floors of the Reminisence Centre into a kind of community centre. The Bugle sat on his hands and didn’t ask anything impertinent about local council’s obligations being overtaken by charities – I hear it’s all the vogue these days.

One of the questions – why isn’t there a big notice in the window of the centre, encouraging people to please use the tiny library out the back for god’s sake? (I may be paraphrasing)…

Then onto Olympics, where a nice lady called Emma told us that we would all be consulted, and that our feedback was essential, but that she couldn’t really confirm anything very much, as she wasn’t a technician, and that all the important people were at Greenwich council for a planning meeting that was unfortunately scheduled to coincide with the assembly.

Lots of questions about parking and permits during the Olympics – many from Kevin Bonavia, who made sure to turn to the audience whenever asking a question… He’ll go far I’m sure. Emma smiled, nodded, and apologised through them all. She couldn’t specify a month by when we could be certain about the parking situation.

There will be bus stop closures on Ha Ha Road.

“Will there be parking on the heath?”. Yes there will, but only on one day (July 30th), and only by coaches picking up olympic believers from Blue Water, and depositing them on Prince Charles Road. But the coaches will be on matting, so the grass will be ok.

Originally LOCOG had promised that there would be no parking at all on the heath.

There will also be a bike rack and taxi rank in Talbot Place.

A question about this: “If I’m a resident, can I still park outside my house?”. No blooming idea. Come along to the informal chit chat at the Clarendon Hotel on 3rd & 4th February, where all will be revealed.

One Talbot Place resident was particularly cross about the impact that the taxi rank and bike racks would have on disabled people in the area. “I’ll feed that back”.

“What will happen to the DLR? Will it be able to cope?” “TfL have done lots of lovely modelling. There are some very colourful models on their website”.

Then it was Liz Dart – Community Engagement officer from Lewisham Council, who was up to talk about the plans for the Olympics Live Site (the big screen planned to go in front of Taste of Rat).

Liz last addressed the Assembly back when Blackheath still had a proper library, but I digress… We were about to be PowerPointed, but Lewisham council make all their staff use secure USB sticks, which never work, as anyone who has attempted to use one in a Windows machine can attest.

She went through the plans, which looked the same as the ones which have been highlighted previously on this site. She mentioned some of the activities that will take place – tea dances, comedy nights, sports films. Some of these will be ticketed, and some will be free.

Zone 3 will contain a climbing wall, and a roller skating rink which sounds rather fun. It will be run by a company with an amusing name which sounded a lot like Bottom, but I’m sure it wasn’t. It wont’ be a fairground – there won’t be loud music, and no “callers” (not sure what they are).

The staff & contractors used will be the same teams that are used for Fireworks night.

Emergency services will be the same teams as usual, except for the police, who will be all centrally controlled from the Met, due to the Olympics.

Lot of questions about noise from the big screen. One very annoyed man pointed out that whilst the screen is facing away from the nearby homes, this means that the cheers from the crowds will be projected towards the homes. Also pointed out that it’s near a busy road.

The location was determined by the Locog events nearby. They don’t expect 5,000 people for the majority of the time. The deciding factor will be the weather, and how well Britain is doing in the Olympics.

“What about the grass?”. It will be maintained by Glendale as usual.

Question about screen times, and adoloescents loitering, upsetting young families. Answer: 8am-11pm but only if there is interest. Alcohol won’t be served throughout these hours, but will probably be available from midday at weekends for example.

“What about seating? Can we bring our own?” No fixed seating will be provided at the site. There may be hay bales, or something of that nature. You can bring your own seat.

Apparently there will be a firework display this year, touch wood. The live site event isn’t expected to make a profit, and there are strict rules about commercial activity so close to an Olympic venue. Initially a school dinner provider wanted to try and break a world record at the site (for the most dinners served? Largest omellette? Can’t remember), but this level of sponsorship wouldn’t have been allowed.

The overall cost is thought to be around £150,000, but some income will be derived from attractions, partnerships, etc.

The licence decision for the live site is due to be decided at a council comittee next week. i got the feeling that they’re pretty sure it will be approved.

Then it was onto Heidi Alexander talking about the Localism Bill.

I’m not going to even attempt to explain it all here. It looks bloody confusing to me, although she spoke well. Interesting points:

* Groups of 21 or more can form local forums, subject to local council approval
* These forums can declare “local assets”, such as pubs, churches, etc to be added to a special List.
* Anything on this list cannot be quickly sold or got rid of by the owner. They have additional obligations to discuss any sale with the council. Either an extra 6 weeks or 6 months delay is added, to prevent quick sales of local assets.

So this raises interesting questions: Who can form a Forum? Are there concerns about groups forming forums specifically to exclude other groups? The legal status of these forums appears murky as the legislation currently stands. Should the Blackheath Society form a forum? Should the Blackheath Assembly be a vehicle for a forum?

What would you like to see on a list of Blackheath Assets? One suggestion was that the station car park could be added to such a list, to prevent National Rail from screwing with it.

UPDATE: See the petition about the station car park.

The greatest hyperbole on earth

UPDATE: You can find more up to date info in this post.

Lewisham Council has posted some notes about the big screen planned for Blackheath during the Olympics. Amongst other things:

The greatest show on earth – live on Blackheath

As well as being great fun, events taking place at the site will be designed to encourage communities to participate in improving their health and well being, become involved in their local community and celebrate local achievements. The Community Live Site will provide a showcase and fundraising opportunities for local voluntary and charitable organisations.

In addition to the big screen, another great attraction at the Live Site will be a beautifully decorative and rare Spiegel Tent which will play host to a range of events for all ages including tea dances, cinema, storytelling and live music. This splendid venue is so glamorous it is worth a visit in itself, even if it is to take in the surroundings, have a bite to eat or enjoy a cocktail created especially for the event.

It’s not that rare… I’m suspecting the Spiegel Tent will be the same one that featured at the Hyde Park winter wonderland. I went to this, and it was an overpriced restaurant & bar in a setting that looked like a leftover from the Moulin Rouge. Quite fun, and it had good Gluvine, but I seem to remember 3 drinks costing the best part of £15. 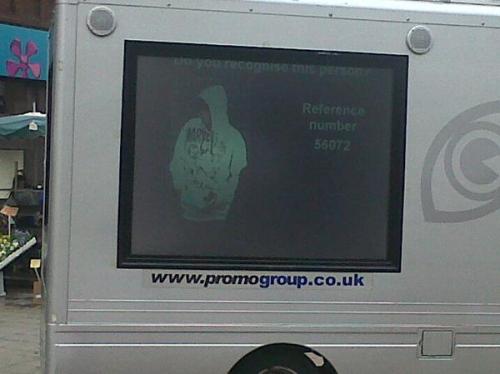 Here’s a sneak preview of the crime screens coming to Blackheath on Monday. Photo by @Nicole_Nation in Lewisham. That is some seriously tacky looking screenage. I really hope the police aren’t paying promogroup for those terrible looking screens. Nice to see private enterprise working hand in hand with the police.

Filed under Not Blackheath but nearby

On Monday the police are planning to bring a large video screen to Blackheath, in order to project images of suspected looters from around the area. I’d love to know how many convictions will result from this. All it will do is make people feel as though they live in a police state. Maybe we could all stand in front of the screens and hurl abuse too?