Memories around the Mysterious Pond 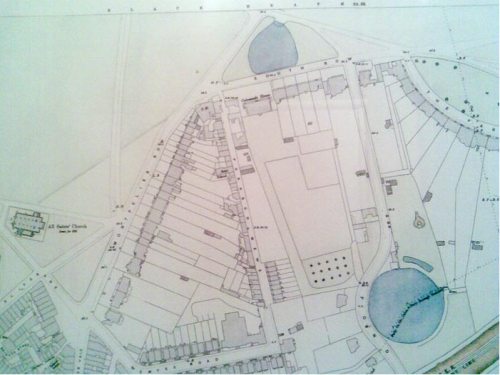 I’ve been meaning to act on this wonderful piece sent in by Tony. I’ve just not had time… At some point I will go and take photos of all of the places he mentions:

Hi – I used to live in Blackheath (on the Lane, in Blackheath Park/Cator Estate, then Southvale Road) and although I don’t any more, I have a great fondness for the place and I love reading your blog.

I saw your comment about the Mysterious Pond – apologies if you know all this already, but if not I might be able to shed some light on it.

Living in Blackheath Park, I was always fascinated by the story of Wricklemarsh House (Neil covers it at length so I won’t give the whole story!) and used to spend time trying to track down any remnants of it.

Take a look at this map

Right slap bang in the middle, you’ve got the Grand House – and a wonderful piece of Georgian bling it was too, as these pictures will show.

It must have had great views up there at the top of the hill, although interesting it faced away from London, not towards it.

What we’re interested in are its formal gardens and especially the round pound to the north of the house. Although the house was demolished, the pond remained for many years after – hence ‘Pond Road’, and the kink in the road, as it travels round it just north of the railway bridge. The pond was drained at some point in the 20th century, not sure when, but it’s still very obvious where it was.

If you stand at the junction of the South Row and Pond Road, you’re at the entrance to the grounds of the old house, and I enjoyed standing there, picturing the grand avenue leading up the hill, with the road to the house following Pond Road up the hill, with the avenue of trees on either side. Once you’ve over the bridge, Pond Road is still a grand road, and I used to wonder if some of the ancient trees on either side might pre-date the houses and have come from that avenue.

When you reach the junction of Pond Road and Blackheath Park, you’re standing exactly where Wricklemarsh stood. Another avenue of trees would continue down what is now Foxes Dale, and another would run east-west along Blackheath Park Road itself – again, I look at the ancient trees along there, and I wonder if they were planted at the time of the grand house.

However, even more interesting is the *other* pond. Looking back at the old map, you’ll see another pond to the south, fed by a small stream called the ‘Kid’ (hence Kidbrooke). ‘Brookway’, off Foxes Dale, is another clue to its path.

Now, that pond has *mostly* been drained, but a small ornamental area of it still remains. Go east, along Brookway, to the Casterbridge estate – and there, in the middle, is a pond – a pond I’m quite confident that was part of the grounds of Wricklemarsh. Look closely at the island – you’ll see there’s a still a bit of decorative statuary remain, and there’s an ornate little bridge too (I hope, anyway, it’s been a while and my memory isn’t 100% reliable). It’s all still there on this Google map.

And what of the Wricklemarsh – well, James Cator knocked it down and developed the estate, but he did keep that wonderful collonnaded front for his own house.

Nathaniel Hawthorne was an American novelist and short story writer who lived in Blackheath in 1856. There’s a blue plaque dedicated to him on Pond Road, and Gloria emailed me (ages ago) to suggest a post about him. I’d intended to read his novel “The Scarlet Letter”, as it was recommended, and is available for free at Project Gutenburg… But as usual, I haven’t managed to get around to it.. I will one day, (and read The Blackheath Poisonings too).

Here is his description of Blackheath from the Squashed Writers website:

One summer we found a particularly delightful abode in one of the oases that have grown up on the wide waste of Blackheath. A friend had given us pilgrims and dusty wayfarers his suburban residence, with all its conveniences, elegances, and snuggeries, its lawn and its cosy garden-nooks. I already knew London well, and I found the quiet of my temporary haven more attractive than anything that the great town could offer. Our domain was shut in by a brick wall, softened by shrubbery, and beyond our immediate precincts there was an abundance of foliage. The effect was wonderfully sylvan and rural; only we could hear the discordant screech of a railway-train as it reached Blackheath. It gave a deeper delight to my luxurious idleness that we could contrast it with the turmoil which I escaped.

Beyond our own gate I often went astray on the great, bare, dreary common, with a strange and unexpected sense of desert freedom. Once, about sunset, I had a view of immense London, four or five miles off, with the vast dome in the midst, and the towers of the Houses of Parliament rising up into the smoky canopy–a glorious and sombre picture, but irresistibly attractive.

The frequent trains and steamers to Greenwich have made Blackheath a playground and breathing-place for Londoners. Passing among these holiday people, we come to one of the gateways of Greenwich Park; it admits us from the bare heath into a scene of antique cultivation, traversed by avenues of trees. On the loftiest of the gentle hills which diversify the surface of the park is Greenwich Observatory. I used to regulate my watch by the broad dial-plate against the Observatory wall, and felt it pleasant to be standing at the very centre of time and space.

Lovely scratchy photo from wikipedia, or even more spectacular 20MB original scan can be found here.

Controlled, but not that controlled…

Lovely soft pastel colours…  Looks like it’s always been there… I suppose someone ought to post it onto fixmystreet though…
Taken by flickr user fotologic, under a creative commons license.