Below is a transcript of the article from 1817 posted earlier. I had an offer to investigate the caves once, which I didn’t chase up, because I’m a coward and a fool, but I would dearly love them to be re-opened (safely)… Just look at this:

The holiday folks were yesterday attracted by the exhibition of a very curious subterraneous cavern – hewn through a solid chalk stone rock, 100 feet below the surface of the earth, on Blackheath Hill. The internal structure of the cave is similar to the excavation under the ruins of Ryegate Castle.

The writer of this article had the curiosity to inspect it. His guide, with a torch, descended a flight of thirty steps to a spacious chamber cut through chalk. It is about eight or ten feet high. At the extremity he came to a narrow passage, to pass through which he was compelled to bend almost double; this opened into another extensive vault, at least one hundred feet from the surface of the earth; it was lighted by candles, and at the furthest extent appeared a transparency, exhibiting in Latin “Behold the bowels of the earth.” On the left of this there is another large apartment, with water dropping from the chalky roof. It is illumined by a few candles, which discover the figure of a Hermit, with his silver beard. He wears a Monk’s cowl, beads, and crucifix. A large book is laid on the table, and his right hand rests upon an urn inscribed, “Sacred to the memory of her I loved.”

Above the hermitage are the words “Anchored Solitude.” Turning from the gloomy cell, the guide led the way to a cavern on the right, which was recently discovered. Here the apartment opening from a narrow passage is perfectly dry; on one side it there was an extensive space under a dome, but it was filled up a short time since by the falling in of three ponderous poplar trees, the roots of which may be seen. There is not the slightest ray of day-light from any aperture the fall may have produced. A very fine spring of water is found in this cavern, over which a pump has been raised, and the visitors may drink it perfectly pellucid. There are several grotesque heads and faces cut in the chalk, but these are evidently of modern manufacture. The following account was given by the guide:–

“It (the cavern) is supposed to have been in existence since the time of the Saxons, and to have been the retreat of rebels under Jack Cade, and banditti in the time of Cromwell. There is but one entrance to it, which many years ago was blocked up with stones, so as to be quite impervious, and no person had the least idea of the cavern. A Gentleman to whom the ground belongs, wanting to build a house a few years since, laid the foundation on the hill immediately over the excavation. The workmen employed on the building, one day left their work to go to dinner, and on their return found the house had disappeared. The foundation had given way. The cavern was then discovered, and the house was build more on the right, where it now stands.

The cavern was again shut up after the house was finished. About two years ago, the person now in possession opened the entrance. He had a door made, and, investigating the cavern, found a communication with the cave where the spring is. Last week he made steps to descend, and fitted up the interior, with a view to the gratification of the antiquary, &c.”

Those amazing cavers at Subterranean Greenwich have found an old description of Blackheath Cavern, from the Morning Chronicle, on Tuesday 8th April 1817:

Saw this, spotted by @mudlarklives in News Shopper Page 15: 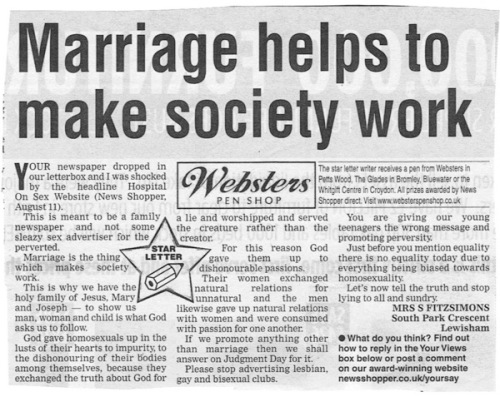 Wrote this to Webster’s Pen Shop:

Just wondering if your business is pleased to be associated with this bigoted rubbish: http://twitpic.com/2iesl1

Please let me know if your company believes that homosexuals “exchanged the truth about God for a lie and worshipped and served the creature rather than the creator.”…

Filed under things to do 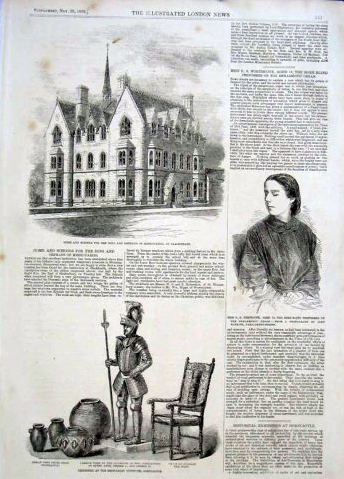 Fancy a pen and ink illustration of Hogwarts? Someone’s flogging a page from an 1856 issue of The Illustrated London News on Amazon, for the princely sum of $21.75 (or £20.42 in old money, including shipping). 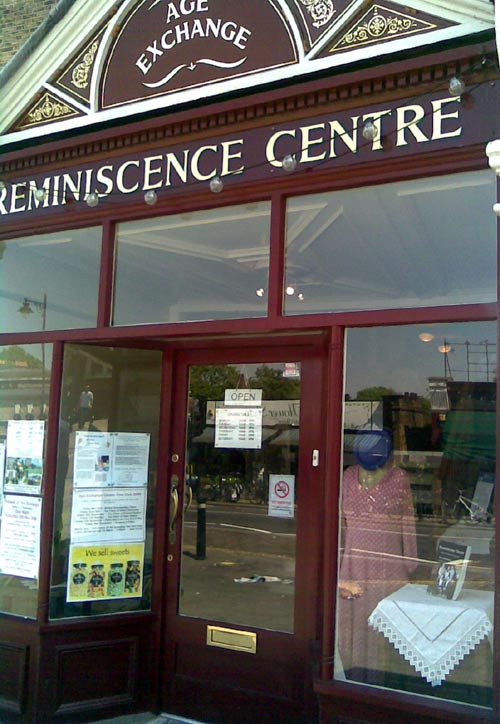 Seasons Greetings! Nice article in The Times mentioning the Age Exchange in Blackheath (which incidentally is looking very festive at the moment, unlike in this photo). Back in Blackheath now after a wintry break with Bugle mum in darkest Cornwall – hopefully more posts to follow!

The Daily Mail comes to the Blackheath climate camp protest, bringing a whiff of lifestyle, despair and misery.

Apparently it’s not a protest, it’s a load of middle class children, who will never be political and are a bunch of hypocrites for even attempting such a protest. Every time I read one of these Mail articles (and feel guilty for clicking on their links) it reminds me how much they seem to hate their own readers. It is as though they are saying “You can’t change anything, so don’t even try. You’ve lost already so go home and do as we tell you”. It delights in asking “Where are all the battle-hardened anarchists with smelly dreadlocks, boasting tales of police brutality?”

Have a little read of this, if you haven’t read about how the Mail behaved in the 30’s. It is fascinating. Yes it was a long time ago, but there’s still a strange odour lingering over articles like this one, even now – it’s just that these days the language has softened slightly, and been replaced with talk of brands and lifestyle choices.

Just noticed the new instructions on the recycling wheelie-bins. It seems that they are recommending that we recycle one particular brand of trash… 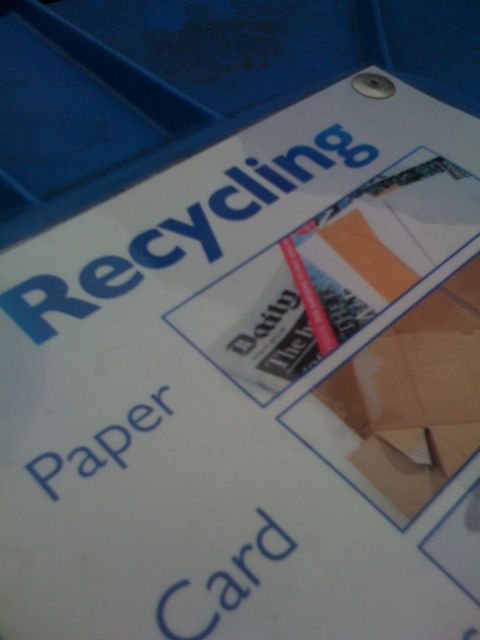 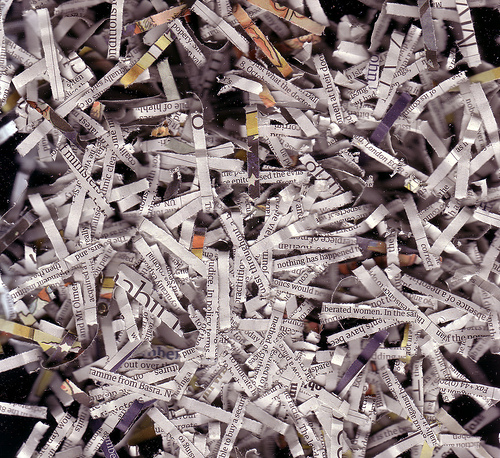 They said nice things!  Not exactly long-winded, but better than nothing.  And no spelling errors.

As mentioned before, we have run out of biodegradable bin liners.  After extensive testing, and careful prototyping at great expense (well, a couple of newspapers worth at least), I have come up with a sure fire plan to show you what to do with the contents of a kitchen caddy.

The plan I eventually went for is this one, but with the addition of some Sellotape (I’m pretty sure Sellotape is biodegradable, and we’re going for saving the planet here, not origami perfection!).

The video above shows how to make one of these boxes.  There’s no sound, and sorry the quality isn’t wonderful, but I only have an ageing apple mac to film the video on!  If you want to make some, use three or four sheets of the largest newspaper you can find.  One box should just about take the quantity of waste in a kitchen caddy (unless it is hopelessly over stuffed, in which case you’ll need two)..

UPDATE:  If you’re feeling of an origami mind, check out this great TED talk.

Filed under blackheath, green, things to do