Recycling – which is it? 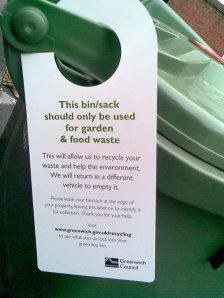 Initially I thought it was a “Do Not Disturb” sign on our wheelie bin.  Our flats have been marked out.  We are officially warned.  Someone has been putting the wrong rubbish in the wrong bins.  It wasn’t me or Mrs Bugle, I swear, honest…  I’m just wondering if they will start daubing our front doors with paint next.

But the photograph above does throw up an interesting point. Looking at all the blogs around here, you’d think it would be easy to draw a conclusion about how our recycling schemes are going.  The Phantom had a great piece about how the Greenwich Recycling plant works, but then I read in The Last Bus Home that it might not be so great after all. They quote another post by a Lib-Dem councillor who makes the point that the government sets recycling targets by the tonne, not by the quality of the recycling.

This means that they don’t really care what happens to our glass and paper waste, so long as it doesn’t go into landfill.  So our glass doesn’t get melted down back into glass bottles, it gets turned into road gravel.  And our paper doesn’t get turned back into paper, but gets shipped to Malaysia instead?!

I’m still glad that it isn’t ending up as landfill, but the carbon cost must be as much of a concern as the landfill.

Wouldn’t the pollutants involved in shipping all that paper halfway round the world be worse than just burning it in the first place?