UPDATE:
Seems it was the move of the King’s Royal Artillery to a new home in Woolwich. (Didn’t think we had a king)… 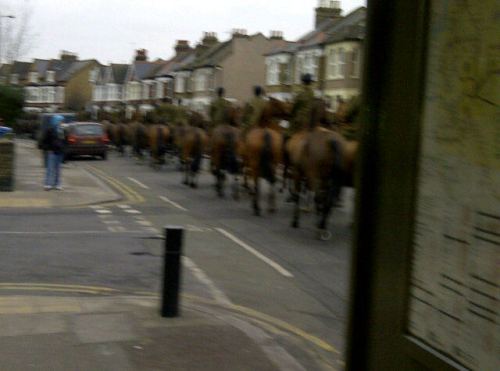 No Horsing Around in Greenwich Park

He’s out there in the middle of the traffic island most Saturdays. If you agree with what he’s saying (and you really should), then please go and sign his petition.

I think it’s great that he’s standing up (sitting down) for what he believes in. It reminds me that older people are becoming a serious political threat as the population ages – lots of spare time, combined with their cheap travel around the UK (which may or may not be bankrupting local councils!) is a potent combination.

Just a reminder – this is not Nimbyism – this is about preventing the destruction of some of the oldest and most historic parkland in the UK. (If there was a serious proposal to stick some wind farms up on the heath, the Bugle would be all in favour!)

You can find more info on the NOGOE website – http://www.nogoe2012.com/
We’ve talked about this before – Save Greenwich Park on Facebook, and Not One Tree.