Blackheath in the blogosphere today

Interviews with Londoners has a short interview with a homeless guy called John, who sleeps on Blackheath. Not sure if being homeless is quite as romantic as it comes across in the text, but it’s worth a read.

Sharp Single goes for an in-depth analysis of the Blackheath Farmer’s Market, and Blackheath itself:

…there’s little more to the village than 6 curry houses, 7 pubs (sic) 8 hairdressers and 93 estate agents. If you want to rent a flat, have your highlights done and scoff Nepalese food, you’re in luck. There is a heel bar (Cobblers to the Pope), the world’s most expensive electrical store, a video store (closing down) and some kind of weird, gothic, travel agents which I’ve never seen anyone go into or come out of. Think of the fancy dress shop from Mr Benn and you’re nearly there.

Not sure it’s accurate (I reckon that the market is cheaper than Sainsbury’s if you stick to fruit & veg) but it put a smile on my face.

The Westcombe Society are exercised by illegal walls erected by the Hexagon Housing Society, and fretting about the London Marathon.

Oh, and someone who works in the Marketing department for a private school in Brighton went to a golf club yesterday, and wants you to vote Tory if you live in Eltham.

On the other hand, Labour are tinkering with parking regulations in St John’s Park. But don’t despair, because someone called Juptin says that he just saw:

“A bloke with a tabard that said Belive in Lord Jesus Christ carrying a huge wooden cross on Blackheath Hill.”

So perhaps we’re all about to be saved. Or not. Me? I’m heading back to the golf club for a glass of champers… Not. 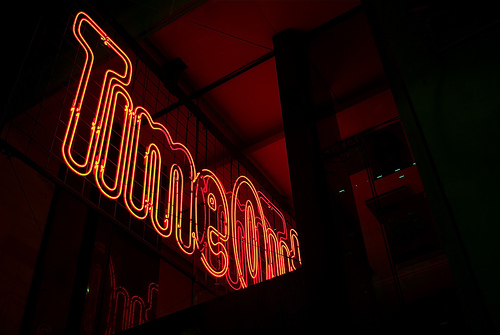 Ah… Blogs about blogging… As a certain excellent writer once declared

“The entire quote-unquote “pro blogging” industry — which exists as the sort of pimply teenage brother to the shirt-and-tie SEO industry — is predicated on the notion that blogging is a meaningful verb. It is not. The verb is writing. The format and medium are new, but the craft is ancient.”

Either way, it’s still nice to get a mention in TimeOut.