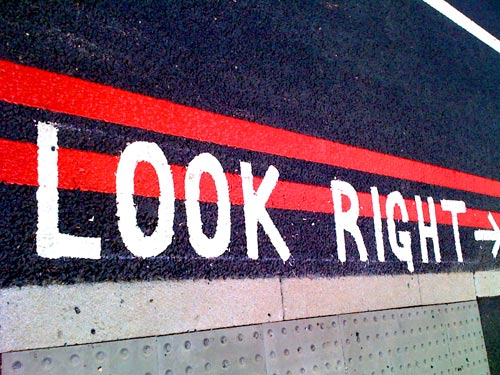 Hello again..  India was lovely, thanks for asking, and having been terrorised by monkeys, elephants and a cobra, it is great to be back in Blackheath, even if it is only for two days…  Mrs Bugle has been hard at work taking photos of things around and about, and has also been away, so I’ll try and put some up over the next few days, despite going abroad again tomorrow for another two weeks!

One of the things I had intended to write about was the crazy roadwork situation around Shooters Hill.  Butterbird suggested it ages ago by saying:

Post something useful. Tell us how to get into the village from Lewisham in less than 45 mins while Shooter’s Hill is shut. 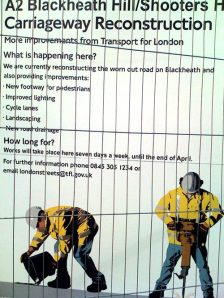 I wish I could!  Being a non-driver with nothing more than a trusty Oystercard and a crumpled SouthEastern season ticket to get me around and about, I’m the wrong person to ask for tips.

However – I have wonderful news – as shown in the sign below, the roadworks were completed at the end of last month.  Which must leave those of you sitting in traffic jams up there wondering what is going on…  At least we have have beautifully newly painted red routes to admire.

Map of Parking in Blackheath

UPDATE: If you’re thinking of driving to the Bike & Kite Festival, don’t. There won’t be any spaces, and the place is crawling with traffic wardens.

A new project… Inspired by Bugle-dad coming to visit, who doesn’t share my penchant for Oystercards (“Take a train? Don’t be ridiculous!”) I’ve had to spend a good while in a car trying to find somewhere for us to park. Aside from this revealing that I have little or no concept of what a one-way street is, it also demonstrated that parking in Blackheath is a right Royal-Standard pain in the backside!

So, I’ve started trying to create a map of parking for non-residents in Blackheath.  Anyone can add to the map, so please click on the Google Map here, and add some more info!  This is an experiment, so if I find the map filled with adverts for viagra, I may switch it back to being privately edited…  Please only add places where the public can park, not residents parking (which most of the roads seem to be). 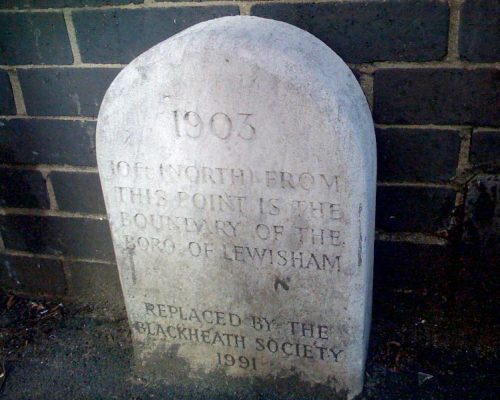 Every time I wander past this little stone, it makes me smile. I like milestones (although, I believe that this is technically a boundary marker, not a milestone). There’s something very Blackheath about it, especially the fact that upon closer inspection, it is not actually from the 1800s, but is an impostor! A replacement furnished by the Blackheath Society, to remind the locals where Lewisham ends and Blackheath begins:

REPLACED BY THE
BLACKHEATH SOCIETY
1991

I guess the boundary must have moved at some point, as I live south of the marker, but my council tax is paid to Greenwich… It’s all very confusing – I supposed a little string of boundary markers would make it more obvious, but possibly hold up the traffic somewhat…

Anyway, stone masonry is a wonderful thing, and I was doing a little research about typefaces used by masons, when I spotted this explanation of Serif fonts:

Serifs are the extended corners at the ends of a letter and like all good design, they have evolved naturally. They originated in the stone-carved letters of the Ancient Romans. Stone masons discovered that it was technically easier to finish chiseling the ends of a letter in a slow curve. Not only did serifs look more elegant but they were also very practical as they formed a natural channel for water or rain to flow away as it cleaned dust from the corners.

And then, the internet being the internet, was inevitably guided towards something really wacky… It seems that Eric Gill, creator of one of the most used modern typefaces, had rather a shocking life… Nothing to do with Blackheath, except to say that my journey from here to there wouldn’t have happened without the little stone opposite Barclay’s bank. 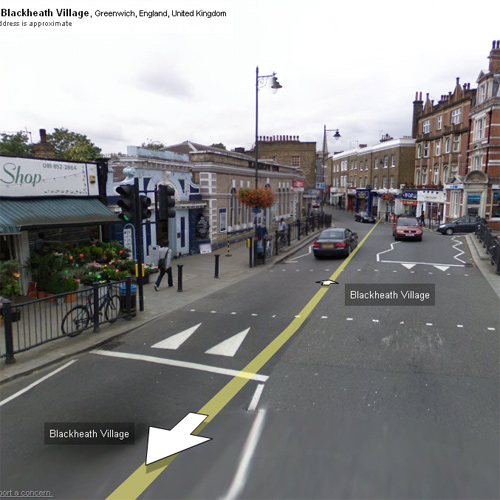 So, it’s finally happened.  Those mysterious looking black VW Beetles have finally dumped all their data into the Google Hive Mind, – lo and behold – we have Blackheath in glorious pseudo-3D almost QuickTime VR Panoramatastic streetview!

The screenshot (from Google) doesn’t do it justice.  Click on the link, and have a look for yourself- you can move all around Blackheath, step by step, as though you were walking down the streets.  I can see my house!  But the real magic is that you can turn your head.  The 360 degree panoramic stitching is really quite amazing.

Anyway, it renders the poor old Bugle’s Virtual Tour of Blackheath to the dustbin, I suspect… And the various Google Maps 3D views don’t seem quite as shiny any more either.

Anyway Buglers, let me know what you spot as you saunter through the cyber streets of Blackheath…

UPDATE: It goes as far as The Pagoda! Map here

Here’s a thing to try if you’re coming back to Blackheath from London by train in the rush hour.  Station yourself next to someone jabbering away on their mobile phone, and watch what happens between Lewisham and Blackheath.  I guarantee you that their call will drop, just before you get to the square-looking houses on the left-hand side of the track before the Station Car Park.

I saw it happen to a girl on Tuesday evening… Sure enough, my phone refused to connect to the internet, and her call went dead.  Is there something down there between the trees?  We’re in London, it’s not an area full of skyscrapers, and it’s not in a big valley!

This looks like fun, if a bit risky… The Polish writing on the page says “Try to beat speed of sound on the grass”, according to Google Translate. It claims to have been shot in Blackheath, but it looks like Greenwich Park to me. 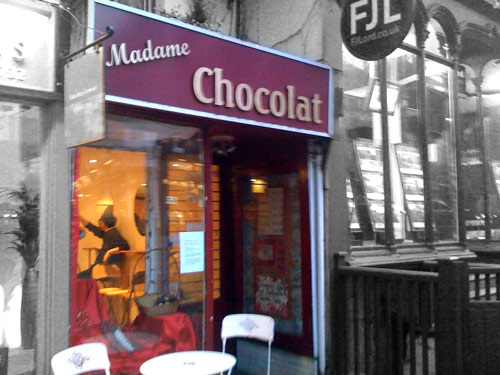 Just noticed that the ominous looking “SOLD” sign above Madame Chocolat has finally kicked into action.  The sign on the front of the shop reveals that they are shutting up shop, but will still be available for catering, and other things.  Which is a shame.  I hope the replacement is as quirky and interesting as the previous shop was, and not a second bijou-starbucks tucked away on Blackheath’s high street. 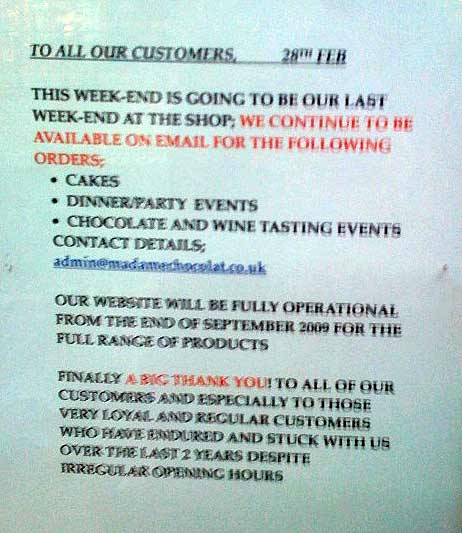 Filming at the Farmers Market 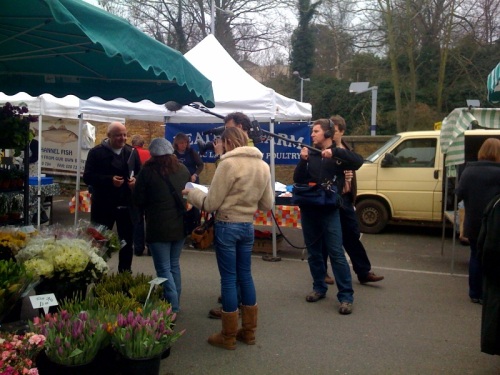 I promise I do go to other places besides the Farmers Market, honest. As I was wandering up, I saw this message from Blackheath’s Premier Twitterer, Richard Bacon. He said that Aldo Zilli is at the Farmer’s Market, so it must be good…

And sure enough, there Mr Zilli was, filming a new BBC series due to go out in the summer, tentatively called “Put Your Money Where Your Mouth Is” (who says the BBC is dumbing down?), whereby a load of “celebrity chefs” go to farmers markets in various cities, and then use the food at various posh restaurants. Apparently Nick Nairn was also wandering around the market too.

It sounds like a recipe for an angry AA Gill column to me, but anyway, the episode being filmed at the Blackheath Farmers Market will be about The Mercer, on Threadneedle Street in London.

Which is all great, except that I wouldn’t know Aldo Zilli, Nick Nairn or The Mercer, if I hadn’t just been told about them… Lord Reith had a rule forbidding the use of the word “famous”: If the person is famous, then the audience doesn’t need to be told that they are, as they will already be instantly recognisable, and if the person isn’t famous, then it is a lie. For less media-saturated times… 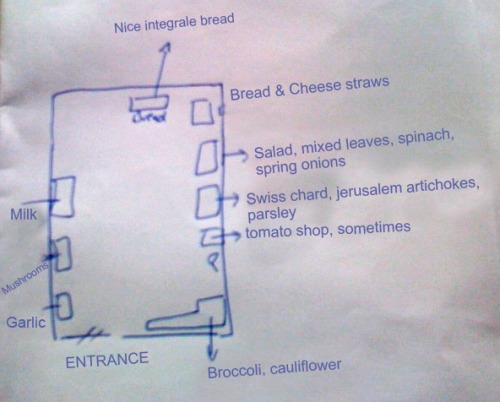 Photos and videos from the Pancake race

Video posted by Henry, earlier today.. My video finally finished uploading to Vimeo, but took ages due to the piece of damp string we use as an internet connection.
Here it is

The finishing line at the Blackheath Farmers Market