Seventies bus and a forgotten hotel

Great photo from 1974 of a Number 54 bus passing the Heathview hotel in Montpelier Row by Lloyd Rich on Flickr. As one commenter pointed out “just about to be overtaken by Emma Peel too”. Sent in response to the perennially popular post Memories of Blackheath 1944-1958 by Bob Land.

Post here by the Phantom, about the Heathview as it was called.
Another photo here.

Someone at Lewisham council has just uploaded a tonne of really brilliant old photos of the area. Most are of Deptford, Lewisham and New Cross, but there are a few Blackheath ones too. The whole set are highly recommended. There are very few details about each photo though, so if you have any info about them, it’s worth adding the comments to their photo gallery. They’re all creative commons licensed too, which is great, as it means that you can remix them into weird little videos showing Blackheath through a timewarp, for example.

It would be great if Blackheath Society did the same thing with their photos.  They’ve got loads of old photos too, but very few are on the website.

Does anyone know if the Sainsbury’s photo is from Blackheath? I have a feeling that Shepherd’s used to be a Sainsbury’s years ago?

Here are all the links:
Education in Lewisham
Leisure and Recreation
Lewisham’s Industrial past
Inns, Taverns and Pubs – public houses in Lewisham
Lewisham’s Libraries
Shops and Shopping
Lewisham Cinemas and Theatres
Lewisham’s Railways

The House of Tomorrow?

The film above shows a “house of tomorrow” somewhere in Blackheath. It was filmed by Pathe in 1957. Olly emailed me, asking if anyone knows where it is. Do you? I’d assumed it could be a Span House, but I’m not sure. Click the image to view, and try to ignore the irritating pre-roll advertisements. Terrible website for some great old newsreel clips.

The poster is a bit washed up now, but here’s the text from it:

Bought this lovely old postcard from eBay a while back..  When I find a scanner I can borrow, I’ll upload some really high resolution scans of it, and possibly try removing the handwriting over the photo. 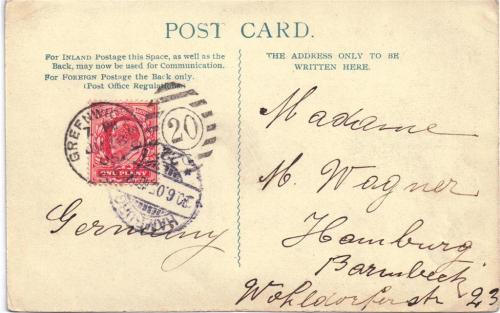 Blackheath High Street – back into time

I found these amazing photos of Blackheath and Lewisham.  One in particular stood out, so I tried to take the same photo from the same position on the high street today.  It just about works.  The photo from 1900 looks much better than mine (although he probably wasn’t using the camera on the back of his mobile phone, I suppose)…

The rest of the photos are well worth a look.  I’ll try and do some more morphs like this one when I get a chance.  The software I used to make this is free, and can be found here.