I crack open a cooking lager from Shepherds Food and watch ITV so you don’t have to. Here’s the link if you want to watch Boulangerie Jade’s appearance on Britain’s Best Bakery. I hope you like Febreze.

Feels a little like eating supermarket brand cereal… It looks like The Great British Bake Off, but twisted through the looking glass. The experts – one looks like the evil twin of the twinkly eyed bloke on the BBC 1 show, the other wants bakers to “innovate”. Frowning and crossing their arms as the camera dollies in…

And we’ve already had two puns “some will rise, others will fall”.

God I hate reality telly. It’s all so fake. The synth string soundtracks from some production music website. It makes me want to cry. The false challenges, heightened sense of tension…

Like the graphics though – dusted icing depicting the UK outline, nice idea…

Oh no, I’m torn here…. Do I side with the local Boulangerie Jade, or the Turkish Cypriots? Mrs Bugle will have to be consulted… At least I don’t have to show any allegiance to the Americans… They don’t seem to be taking it very seriously. 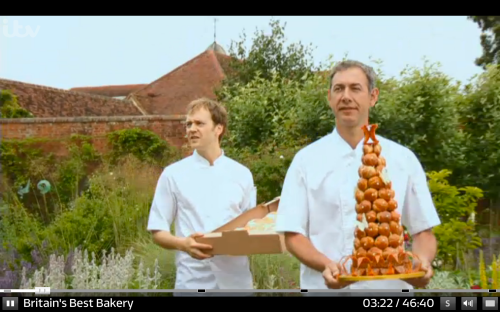 “Go on, walk past the camera with your Croquembouche. Now do it again. Go on”.

These programmes pretend to be instructive, but we all know that the majority of the audience will never go anywhere near building a fancy turtle cheesecake….

Tense music. Judges say it’s bad, then they say it’s good. I have no idea what this means.

It must be time for an ad break soon.

Now we’re off to Haringey with the Turkish Cypriots. So let’s have some ethnic music shall we? Doesn’t matter where it’s from, fuck it yeah?

“Patisserie Dmitry still leads from the front” – what does that even mean?

“I feel like I’ve just stepped into the Mediterranean”. Does that mean it’s too salty?

And now we’re in to the tense bit again. Pizzicato synth strings. And they all love it. They all say it’s lovely. Where’s the tension? Does everyone get an A?

13m22s in -Now it’s Boulangerie Jade’s turn. Lots of shots of Blackheath “nestled in South London”, etc etc… They started 10 years ago. Christophe is the French one, and Joshua is the German one. Cor the food looks good. 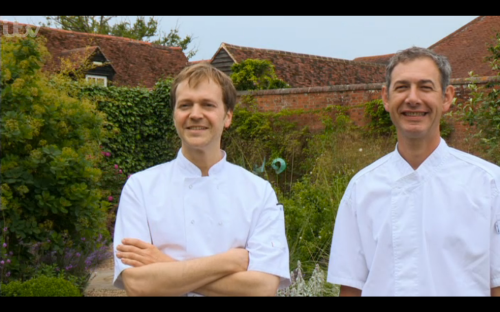 Makes me realise how lucky we are to have such a great bakery in the village (sorry Greggs). 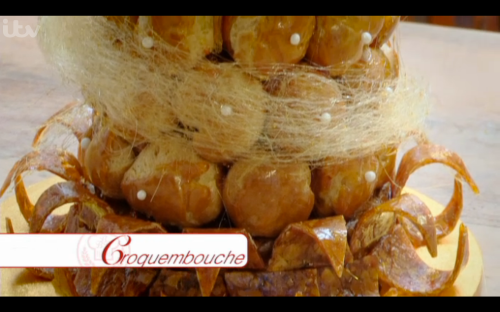 Their signature dish is the Croquembouche. The voice over tries to inject some peril into whether a man who has been baking for ten years can make his signature dish. Even though we’ve already seen it in the completed form.

More chirpy pizzicato strings. And now a music box and flute for building the tower. Why? 360 Profiterole balls have been cruelly culled to make this tower. It looks bloody tasty though.

Oh no! The judges think it “lacks identity”. How dare they! Where’s my pitchfork…

And now we have an advert for Febreze, because my house stinks. Followed by Lenny Henry advertising Premier Inn, because I’d rather be somewhere else but can’t afford a nice hotel. Followed by god knows what… An ad for a Mercedes. Then more Febreze. And now the video’s stopped because I’m running an adblocker… Refresh to try again, and now it’s working…

More ads. Galaxy chocolate endorsed by a dead woman. So creepy. Now an ad for Maryland Cookies, with a pirate theme. These look disgusting. Now some autotuned popmusic advertising young people faling over in a bar and getitng married. Njoy King electronic cigarettes apparently. Now an ad that looks like WindowLicker, but is actually an advert for MoneySupermarket. God I’ve remembered why I never watch ITV. Why is Snoop Dogg advertising car insurance?

And third fucking Febreze ad?! I may die.

Now we’re over to Chiswick and the Americans again. They still look lackadaisical. And they’re both called David.

Confetti corn pie sounds like a terrible idea, but looks quite nice.

The judges didn’t like the pastry. Finally we have some negative feedback. Phew..

Now we’re in Haringey again. They’re making something different. How are the judges supposed to judge between two entries if they’re making different recipes? Where’s the science?!! I want a double blind experiment damn it..

Judges are slagging this one off too! Round two is clearly about raising the tension.

The Haringey team should have made Poaca – always a winner!

And the judges seem to like it… Again. It does look yummy though…

Now an ad for Febreze, followed by an ad for Honda using lots of zooming effects. Now an ad for mouthwash. And an ad for leopards? Oh no, it’s an ad for cat food. Whiskas. Nurture their nature. And FEBREZE AGAIN!

Now the judges show us how to pipe biscuits… Boulangerie Jade are making long biscuits. The Americans are making a revolutionary open ring shape – cutting edge baking at its finest! The tension is killing me!

Turkish Cypriots have had a disaster with the piping. So have the American Davids. Boulangerie Jade are looking like the front runners…

“Bakeries, you have thirty minutes left”…. Or what? What happens? Why does all telly need a time constraint?

Boulangerie Jade are now dipping their biscuits the classic way. They look pretty tasty to me…

Now for the judges.

A bit of a voice over to remind you what’s at stake – a place in the regional final. And what we really need now is MORE FEBREEZE, followed by some “push-up” mascara adverts. Center Parcs, with really annoying music. Oh no, the terrifying uncanny valley that is the Ragu puppet family. Like scary muppets. Now a Game of Thrones theme to advertise Crunchy Nut Cornflakes. Such Fun. And more Febreze because we stink.

And back to the show.

Lots of hugging of friends, and we still haven’t come to the judging yet… They look very stern. All the bakers are standing next to their tables.

And a recap, just in case you can’t remember what happened ten minutes ago.

The judges like the Americans biscuits. They like the orange blossom water flavour. She just called a biscuit a “product”.

Now on to the Turkish Cypriots. Judges like the visuals. Biscuit is very light and buttery with a wonderful orange frangrance. They love it.

Now Team Blackheath’s turn. Their biscuits “do handle beautifully”. Like a good car. Ridiculous shots of judges eating biscuits. Judges complain about the amount of chocolate on the ends of the biscuits. I swear I’m not making this up.

Judges like the Turkish biscuits the most from this round.

They thought the Boulangerie Jade biscuits were over cooked! I reckon these judges work for Greggs round the corner..

The Americans! How disappointing… Boulangerie Jade is a great place! I must go and buy some baked produce to cheer them up! These Febreze salesmen wouldn’t know good baking if it bit them!

The End. (Sponsored by cheap lager).

7 responses to “Almost liveblog of Boulangerie Jade’s bake off.”