Missile questions for our MPs

UPDATE: The response to this post from Heidi Alexander MP can be read here.

So we are to have missiles in our beautiful shared garden.

Clive Efford (Labour, MP for Eltham) criticised the Defence Minister for placing missiles in Olxeas Wood. But what about the ones planned on Blackheath?

MoD were looking at Blackheath suitability for potential olympic missile defence site last week. No decision yet taken. link
Have asked MoD for face to face briefing. link
I know it sounds surreal but sadly true. Nothing has been decided yet though. link
MoD describe it as some form of ground based air defence system. That’s all I know at the moment. link 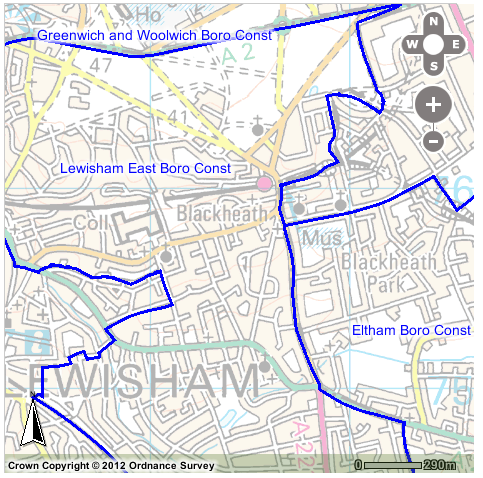 A commenter on my facebook page suggested the possible location of the missiles:

As can just about be seen on the Ordnance Survey Election Maps, if the missile site is located north-east of the Territorial Army Barracks, this places it firmly in Heidi’s constituency.

However, assuming it is a Rapier missile, it has a range of 500m (seems very short to me?), meaning that it could also potentially kill people in the neighbouring “Greenwich and Woolwich Borough” constituency, the MP of which is Nick Raynsford (Labour).

I’d dearly love to attend the assembly meeting tomorrow, but I’m unlikely to be able to make it. If Heidi Alexander is at the assembly on Tuesday, here are some questions, you might like to consider asking:

* Who owns the land that the missiles will be placed on?
* Were any special orders required to place the missiles on the land?
* Who owns the missiles?
* Is there any way that you could have prevented this from happening?
* When did you first hear about it, and how was it presented to you?
* Do you think it is an appropriate course of action, taken by a supposedly sovereign nation, during peace time?

Washington’s need for reassurance is exasperating British officials and anti-terrorism officials, who have privately raised concerns about the meddling, as well as the size of the US “footprint” in the UK during the games next year.

Mr Hammond was asked by his predecessor to confirm whether there would be a “full range of multilayered defence and deterrents” in place for the 2012 Games including surface-to-air missiles.

He replied: “I can assure him that all necessary measures to ensure the security and safety of the London Olympic Games will be taken including – if the advice of the military is that it is required – appropriate ground-to-air defences.”

UPDATE: Reply from Councillor Chris Maines on my facebook page:

I can confirm that there will be an opportunity to ask questions at the Blackheath Assembly tonight – a senior police officer will be present. However, this is an MOD issue and they are a difficult organisation to engage in full consultation. Since my briefing last week I have raised question at cabinet committee level although it seems as a matter of national security it is difficult to get definative responses, Cllr Chris Maines – Chair, Blackheath Assembly

On Facebook, Kevin Bonavia (local councillor) says that an MoD representative will attend the Assembly tonight.

Missile base on Blackheath?

Possibly something to bring up at the Blackheath Assembly tomorrow.

PLANS to blast terrorists out of the sky above Greenwich during the Olympics have been attacked by an MP who says he was not consulted.

The Ministry of Defence is proposing placing batteries of surface to air missiles near Oxleas Wood cafe in Shooters Hill and on Blackheath during the Games. Some of the equipment was brought in last week as part of site evaluations.

Anyone know where it is? Time to get a kite up with a little camera on it, I think…

UPDATE – If you’ve got any idea where it is located, feel free to play Pin The Tail on the Missile Base.

UPDATE 2: The Daily Mail says they are using Rapier missiles. Here’s a link to a less outdated version of the missile, so that you all know what to look out for…. (thanks Rupert)

UPDATE 3: Attempted to make it clearer that the image at the top of the screen is “for illustration purposes only”…