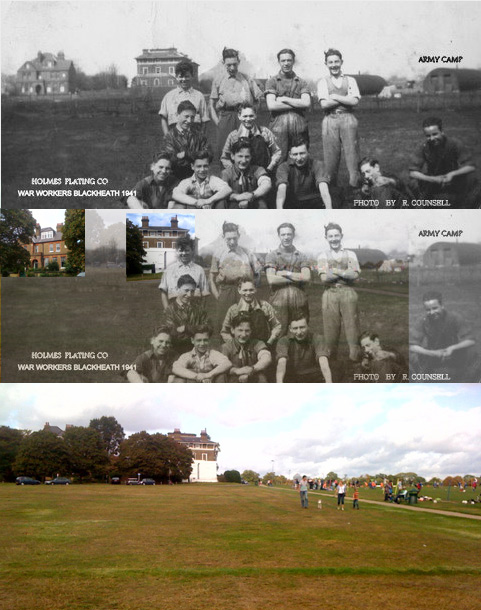 Here’s an interesting thing. In 1941 Reg Counsell worked for the Holmes Plating Company in Blackheath. He’s 85 now, and has sent in some photos of his time there. One in particular caught my eye – a group of the workers up on the heath. So I went to try and work out whereabouts it was taken. There are so many more trees on the heath now! And for some reason the three windows on the big white house are now blocked up. Maybe blacked out during the war? But if that was the case, surely they’d prefer to have a view of the heath now? Very odd… Anyway, I’ve made a montage above showing Reg’s photo, and some current images from the heath.

A good 50 or so people outside the PoW for the Blackheath Society’s guided walk (they’re only allowed 30 inside the houses). Much wringing of hands and asking of people to leave. Next time make rice-paper tickets and hide them all over the Heath!