At about 17:40 this evening, Mrs Bugle was dumped off a 185 bus near Rosenthal Road this evening by a cowardly bus driver who when he saw a load of people looting a shop. Rather than getting his passengers to safety, he opened the doors in front of the shop, dumped the bus and ran away. He left the passengers to fend for themselves. She ran away towards Ladywell, and called 3 different taxi companies who all said they couldn’t pick her up because of the riots in Lewisham. She was with her 15 year old niece, and only managed to get home because a passing black cab driver took pity on them and picked them up. She didn’t have enough cash on her to give him a tip.
Twitpic by @kate_day showing looters breaking into Argos in Lewisham
UPDATE:
The clothes shop Rogue in the village has been smashed up: 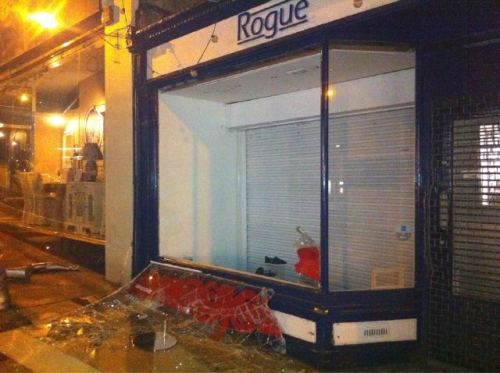