Man’s body found in burnt out car in Blackheath

Just been past the crime scene off Blackheath – burnt-out car and forensics teams still there. Nasty business. http://bbc.in/hMBHbN

(I’m not in London this week, so will be more behind the news than usual – sorry).

Blackheath – where a boundary became the cuts frontline

New 853blog Blackheath – where a boundary became the cuts frontline – excellent post about the great wall of Blackheath. Can’t help wondering if there isn’t a little more tin-foil-hat-conspiracy-theory to be dug up behind the library cuts though… 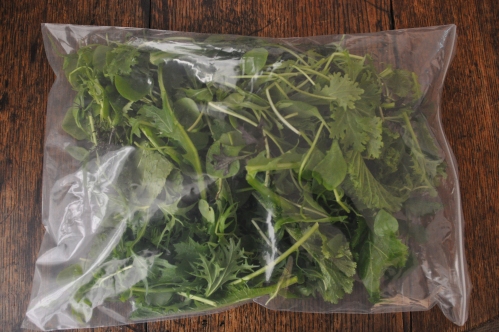 The farmer’s market looks much more expensive, right? Except that how often do you buy a bag of salad from a supermarket, that looks crispy and fresh on the first day, and becomes limp and brown on the second day? An unnamed person at the farmer’s market told me:

We do sell to the supermarkets, but by the time it gets to your fridge, even though it says fresh on the label, it can be 7 days old.

Supermarket salad is kept fresh looking by using a “protective atmosphere” inside the bag. The air in the bag has different levels of carbon dioxide, oxygen, and nitrogen, to slow the speed at which the bacteria can grow. So after it is opened, it suddenly starts to act its age! Felicity Lawrence’s book Not on the Label

is a great place to read more about this.

Also, the salad shown in the top photo lasts the two of us for most of a week. So we can buy the amount that we need, not the amount the supermarket wants to sell. I should point out that I didn’t compare to the cheapest Sainsbury’s salad bag (0.74p per gram), because the taste of the salad isn’t comparable. The one from the farmer’s market tastes amazing, is organic, and lasts a week!

The parsley is much more of a bargain. We get loads of parsley each week, so Sainsbury’s can’t compete here. The parsley is from the “hello duck” stall. I like them. Nobody calls me duck in a supermarket.

I compared to Sainsbury’s because it’s my nearest supermarket, and it isn’t massively up-market. It’s worth pointing out that other processed foods in the farmer’s market aren’t such a bargain, but staples, veg, and unprocessed foods really can work out much cheaper.

853blog has an interview with the organisers of the proposed festival on the heath, now provisionally branded as “On Blackeath”. They have a website too, where you can sign up for more info, or send a comment. It’s good that they’re providing more info. I still wish it was a freebie though. Maybe I’ll take my mandolin and start an illegal rave down at the other end of the heath…

Library going, but what about the square?

There’s a carnival against the cuts at 12noon on Saturday, at the library (which the council have confirmed will be shut down permanently on 28th May). Thanks for listening Steve, really! Anyway, please show your support. http://www.carnivalagainstcuts.org.uk/

From the Carnival against Cuts site:

All over the borough of Lewisham services are threatened and people being thrown out of their jobs because the Labour Mayor is accepting the Tory/Lib Dem cuts and has chosen to put sacrifice our vital services.

Here is the list of places where you can show your strength of feeling. There will be petitions, leaflets, balloons, songsheets.

Make a placard to show your disgust at Steve Bullock’s priorities. Dress up in a costume. Bring your old saucepans, kettles, whistles, drums to make a noise at 12 noon!

Ok, so it’s technically Greenwich, and I don’t normally do gig reviews, but it was so good I’m going to mention it anyway. The Deptford Rivieras are a great live band. And they play for free at the Mitre Pub in Greenwich semi-regularly. Sax, hammond and drums. Really accomplished stuff. Brilliant fun. Great pub, good beer, loud but not too loud. Just great.

The next gig is on Friday February 18th at the Mitre pub in Greenwich. (Almost opposite the Picture House cinema).

Have a look at their site, but don’t trust the recordings! This is a live band, and the recordings just don’t come close to how much fun they are to listen to.

The House of Tomorrow?

The film above shows a “house of tomorrow” somewhere in Blackheath. It was filmed by Pathe in 1957. Olly emailed me, asking if anyone knows where it is. Do you? I’d assumed it could be a Span House, but I’m not sure. Click the image to view, and try to ignore the irritating pre-roll advertisements. Terrible website for some great old newsreel clips.

Having said in the previous post that I couldn’t find The Crown Pub on John Rocque’s London survey map from 1746, I’ve found it on another site:

If you look just below the delightfully named “Dowager’s Bottom”, you can see a sprinkling of buildings, around the triangle that is now Tranquil Vale and the Royal Parade.

What’s going on with The Crown Pub rebuild?

I’ve been a bit lax in not mentioning the redesign of The Crown Pub, as noted in the comments to an unrelated ovine-post:

I always read this excellent blog with great interest, but I can’t believe that one thing has gone without comment on these pages. I went into the village last night for a pint only to find that my regular watering hole The Crown was a building site. It looks very much as if they have ripped out the lovely bay windows (with the two big leather seats) and are replacing them with a flat wall and french doors. How can they be allowed to change the face of such an old and surely protected building so much!?
Yours,
Shocked of Charlton on the 380 bus route

Above is a detail from the planning permission documents at Lewisham Council. Interestingly the original plans for two “jumbobrellas” at the front were withdrawn after 21 complaints were made (I’ve no idea if these two events are related). See the a drawing from the original submission below: 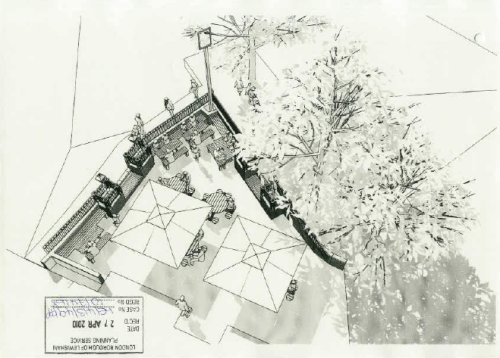 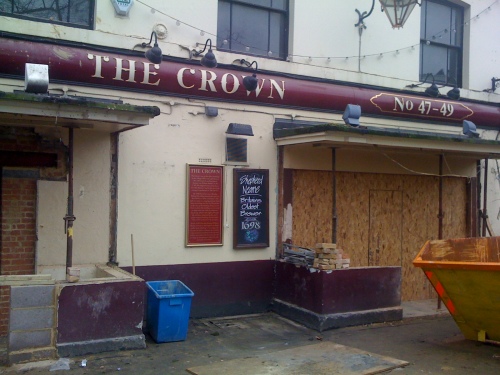 Above is a photo from today, where you can see that the bay windows have been removed to make way for wider openable doors. Which I can’t help feeling might make it feel brighter and more appealing, particularly in the summer.

dates it back to at least 1773 (the first record of a licensee), with a building having been present on the same site during the John Rocque survey of 1741-1746. I had a look at the map here, ! UPDATE: Found it.

Neil points out that it has undergone many renovations during its lifetime, starting out as a building “only three doors wide, with a round-headed door at the entrance”. (page 99).

It’s never been my favourite pub in the area though… Who knows, maybe the improvements will change that… If they re-instate the pole climbing competition of 1892, where a leg of mutton was attached to the top of the pub sign post, I’d definitely come along to watch!

Here’s an interview with Blake Morrison (he of the library read-in the other day):
http://theguide.greatbritishlife.co.uk/article/the-great-divide-6501/

It was spotted by Kidbrooke Kite, who focused on the issue of gates around the Cator Estate, including some photos:

The full interview also mentions many great things about living in Blackheath, not just the gates. I’m not a fan of the gates… Maybe it could be renamed the Cator Compound?