Southern Gas works of a lifetime 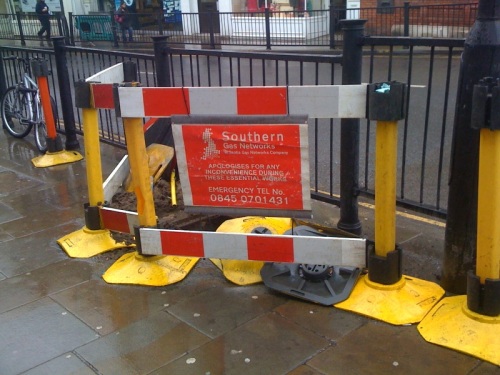 Seriously beginning to wonder whether Southern Gas are ever going to tidy up the mess they’ve made of the high street. I don’t know whether they’re digging for some incredible new type of gas, but I’ve been dodging their plastic roadwork barriers every day for the last month, and I’m getting bored of it.

So I emailed them at customerservicesouthern@sgn.co.uk 6 days ago find out when they would come and tidy up. Here’s the reply:

“I am pleased you have taken the time to contact us and I can confirm your enquiry is being investigated by the local depot who will be in touch shortly.

I have logged your enquiry onto our system and for any future correspondence, your reference number is CCS-46923.”

Which is great, except that there is no sign of the roadworks shifting! Is it something about utility companies with “Southern” in their title?! 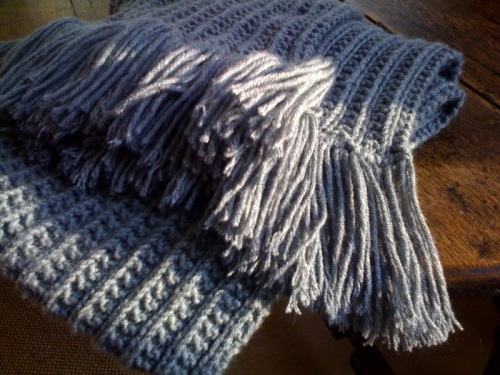 Just saw this great post detailing the knitting patterns that are being lovingly distributed from the Reminiscence Centre, and it reminded me of a post I had intended to do a while back, when Mrs Bugle’s mum came to stay. She is an accomplished knitter (see my lovely scarf in the photo for evidence). We had to find her some wool and needles, which is not something I’ve ever had to do before! A quick tweet from @clogsilk and @glittershim told me what I needed – I Knit in Waterloo is a great place, but pricey with it – picked up some lovely wool, and some knitting needles that made me feel like I was testing wands in a Harry Potter novel. @JoBrodie suggested the Hospice shop opposite the Royal Standard pub, which I made several failed attempts to get into (it keeps odd opening hours). When I eventually did get inside, the colours available weren’t great. Rolls and Rems in Lewisham was also suggested, but I didn’t make it that far.

How to stop junk mail 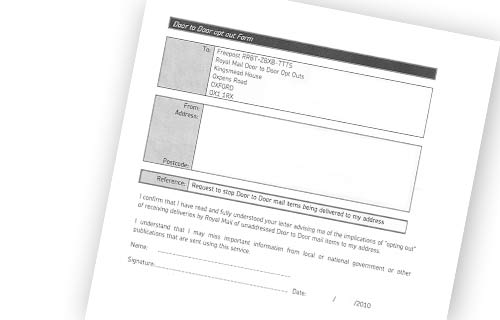 I’ve finally requested that Royal Mail stop sending us junk mail. Having read this, it seems like it would be better for the planet, the postmen/women and even the Royal Mail in the long term if they packed in the junk mail habit.

The official method to stop your junk mail is quite convoluted:

On their website, they ask you to email this address: optout@royalmail.com, telling them your name and postal address. Then, in a few days, a letter and a form turn up in the mail. You have to sign the form and return it to them. And supposedly this stops all unaddressed mail (I’ll let you know if it works).

I suspect that Royal Mail aren’t cross-referencing every email with every form. One of their reasons behind such a complex process is to ensure that everyone in a property has guaranteed that they don’t want junk mail. Personally, I can’t imagine anyone getting annoyed that their junk mail has stopped. The other reason is that government documents may be sent to you using the unaddressed mail system. If the government can’t figure out a better way of telling me important information than “To the Occupier”, then I think I probably don’t need to know about it.


Above is a map. The upper pin shows the (excellent) Lee Road NHS GP Surgery in Blackheath. The lower pin shows Lee Health Centre, where you will now have to go if you want to see a health visitor or clinic nurse, because Lewisham Primary Care Trust have stopped the funding for this at the GP’s surgery.

So compensate for the loss of the Wednesday afternoon clinic, which was usually used by 25-30 people, they’ve added only 1 hour extra to the new centre. So, two minutes per baby! Great!

To add insult to injury, it seems that nobody bothered to tell the GPs. The plan was decided before Christmas, but they were only told about it 2 weeks before the cuts took place.

So they have written a leaflet, explaining this to their patients. It’s surprisingly angry. It even goes as far as naming the people responsible: 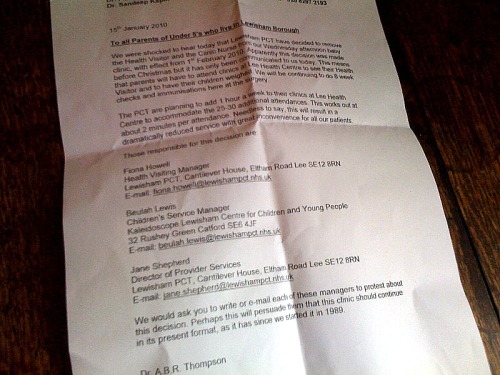 So, if you think that this is unacceptable, maybe you could email the following people:

I’m writing to you, to urge you not to reduce the health vistor and clinic nurses available in the Lee Road Surgery, in Blackheath. These services have been working well in their present form since 1989, and to remove them makes it harder for anyone with a child under 5 who uses the surgery. 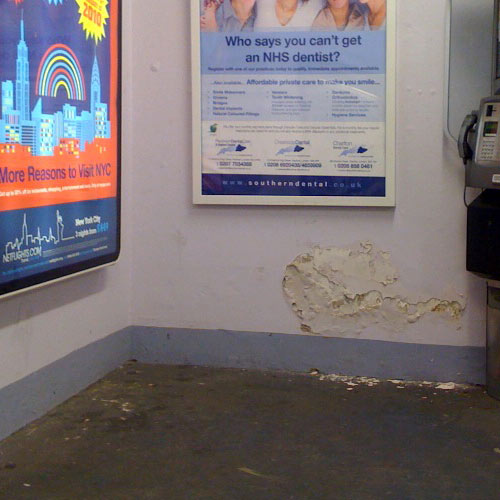 Yesterday the SouthEastern Trains managers did their regular Meet the Manager thing at Charing Cross Station.  Managers stand around in the main part of the station, answering questions from commuters.

It’s a good idea, and I imagine it takes some guts to do, especially after the recent snow chaos, and subsequent allegations over stats massaging.

So I had the bright idea of going along, trying to find the most senior manager, and putting some questions to them, for the blog.  The first man I approached happened to be Charles Horton, the Managing Director.  He absolutely refused to be recorded, saying that today was for customers, not for interviews.  Despite explaining that I am a customer, and much waving of season tickets, he would not talk to me unless I switched it off.

So I did, which means that none of the following is verbatim.  Your loss, Charles.

We spoke about the snow and the revised timetable.  He completely denied that the reduction in timetable was designed to avoid big customer payouts, saying that their only concern was avoiding trains full of passengers getting stuck.  When I asked him what was different about SouthEastern, compared to the adjacent networks which operated a better service, he claimed it was due to the way SouthEastern’s lines were structured compared to the others – for example SouthWest Trains run a straight line in and out of Waterloo, whereas SouthEastern’s route has junctions and forks in it.  This sounded thoroughly unconvincing, but hey, I guess he has to come up with something.

I desicribed the difference between claiming a refund from London Underground (fill out a form in the station or online, and send it in) with that of SouthEastern Trains (several different methods, each more byzantine than the next).  He agreed that theirs was more complex, but claimed that this was due to the rules set in place by National Rail and the government.

I asked him whether he believed that the breaking up of the railway into multiple train operating companies allows everybody to absolve themselves of responsibility.  He refused to be drawn on any personal opinions about anything around this, and basically took a pragmatic attitude – “we are where we are”, claiming that the procedures drawn up by the government mean that SouthEastern are highly sensitive to customer satisfaction.  One example he gave was “discretionary travel” (people without season tickets), which he said SE trains relies on heavily- if they can’t operate a good service, then people will use other means of transport.

When I asked which of his competitors train companies I should be using from Blackheath if I wasn’t happy with his service, he acknowledged that they have a monopoly in a given area, but again went back to “that’s just the way it is set up”.

I pointed out the poor state of Blackheath station – not because I expect the managing director to have an intimate knowledge of every station (he was quick to point out that he could not), but because walking through a station with peeling paint, ceilings covered with plastic bags and gaffer tape, and plaster falling off the walls, sends a clear psychological message to your customers that you don’t give a shit about them.  He muttered something about “water-egress” at that station.  I have no idea what that means… I’ve seen water flowing down the steps occasionally, but you’d think that a lick of paint wouldn’t break the (£61.5m profit last year) budget.

To conclude, the problem isn’t SouthEastern trains per se.  They’re a private company, looking to maximise revenue for their shareholders within the boundaries set out by the government.  The problem is the splitting of the railway into multiple companies.  If there’s anything worth campaigning for, railway-wise, it would be the re-combining of the TOCs into a single body.  At this point, I wouldn’t even care if it was a private company – at least it would stop the buck-passing… 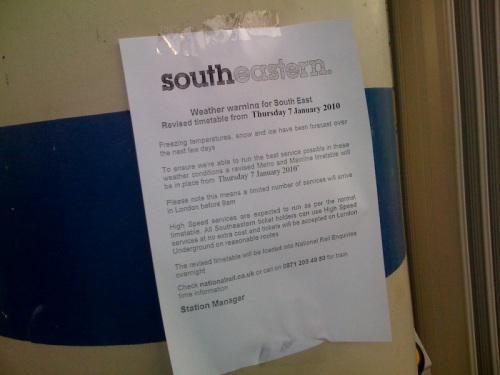 As pointed out by @AdamBienkov, SouthEastern have provided an explanation of why they ran such a poor service during the inch or so of snow that fell last month in the South East.  I’ve tried to convert it into text, but the hopelessly blurry, badly scanned PDF file provided at the london.gov website made it even less comprehensible.

Here’s a quick summary, if you haven’t got time to read the real thing:

Why did you run a revised timetable, finished at 8.30pm throughout the piddling quantity of snow that fell?

We realised that we’d have to pay lots of money out to our customers for our lousy service, unless we under-promised and over delivered, so rather than try to put on as many trains as possible, we figured out that we could stick up some dirty A4 sheets of laser-printed Times Roman warnings, and this would allow us to wriggle out of our obligations – like this one!

Why won’t you be offering refunds to season ticket holders?

Because they’re a bunch of mugs!  Why on earth should we?!  They pay £1000 a year, and we don’t even have to give them a seat on our cattle trucks!*  Are you high?  If we started giving them their money back, we wouldn’t be able to make £61.5 million in profits!

Now that we live in the age of the internet, maybe you could make it easier for your customers to request compensation?

Yeeeassss… That’s a greeeat idea… Maybe we’ll make a little iPhone app for each of our customers?  And you can click on Charles Horton’s beaming face every time you get squeezed into a carriage, and sit waiting at London Bridge for 20 minutes on  a Monday morning?  That’d work.  If it’s all the same with you, we’ll stick with arcane system we have right now, thanks.

All aboard the Gravy Train for Network Rail Bosses