Prosperity without growth, in a tent on Blackheath 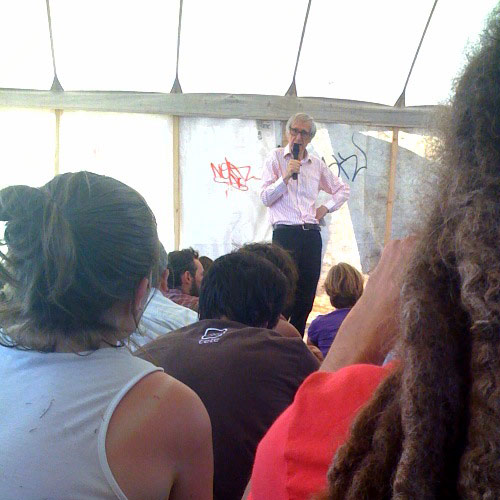 I attended David Fleming’s talk at the Climate Camp Is economics without growth possible?. The place was packed. It was really interesting to hear someone playing with big ideas, and asking difficult questions.

I’m the first to admit that I was out of my depth at this talk. The Wind Turbines talk was much more understandable to me. Nonetheless, here are my notes:

When people talk about “Growth” they usually mean one of three things:

GDP
Per capita growth – ie GDP split by the number of people in a country
Quality growth – perceptual measure of wellbeing, eg. number of suicides for example(?)

He is not talking about the 3rd one, as it is very hard to pin down.
Per capita growth is a much more useful figure than GDP. GDP is not useful as it doesn’t account for population size –
it is an entirely meaningless number. Says that no sensible government should ever quote GDP numbers.

So per capita growth is what we should talk about.

Why does growth happen? Because of productivity. If you are a manufacturer and you make widgets for a year, and then discover a cheaper way to make them next year, you will make more profit for the same cost. You may be able to hire fewer people without cutting production for example. This is growth.

Growth is sometimes assisted by borrowing and lending by banks. Banks are seen as the drivers of growth, because banks want businesses to repay their loans with additional interest back. Therefore people claim banks are drivers of growth. This is wrong. It confuses cause and effect. Productivity advance is the driver of growth.

So what are the benefits of growth? It is an indispensable requirement for a market economy. Lack of re-employment would be disastrous as efficiencies increase. Eventually government would receive so little money from tax that government would go bankrupt.

The type of economy that we have needs to continue growing in order to function. This is an example of dynamic equilibrium. So is a bicycle (has to keep moving forward, otherwise it cannot balance). But an economy that must continue to grow indefinitely is dangerous.

But in a finite world, how can we account for the idea of a continuously expanding economy? One way that economists attempt to deal with this is through something called De-linking.

Delinking is a way of ignoring the fact that the economy cannot grow indefinitely. There are two different types:

Relative delinking. Environmental impact can be reduced as growth continues.

Absolute delinking means using the wealth to reduce environmental impact. David says that this is a holy Grail. It doesn’t happen.

In his opinion, delinking doesn’t work.

This is widely recognised but not in government circles. Tim Jackson’s book “Prosperity Without Growth” is very good about this. It hasn’t been published yet, but you can read it online.

Peter Victor says we should concentrate on avoiding advancing productivity by creating a shorter working week.

But three day weeks are problematic. Writers, brain surgeons, and pianists would probably perform very badly if they only worked 3 days a week. However, if you work in a job at McDonald’s you are more likely to be encouraged to do it. So these proposals tend to be directed at unskilled jobs.

Another issue is “De-materialising” – getting the workforce to concentrate on services not goods. But what are services? Tourism is a major service, and yet still causes huge climate change problems. Services are not inherently carbon reducing within themselves.

Another proposal is the “Green New Deal”. Changing financial services and create a huge push towards renewables. This is Caroline Lucas’ main campaign. The idea suggests a “double dividend” – that we can have our cake and eat it. There are dangers in this. Overspend on this, and government may end up creating a massive depression. Also large scale technical projects tend to be misguided, and end up having unexpected implications.

He designed TEQs. TEQs stands for Tradable Energy Quotas. It is an entitlement scheme where every energy user (ie every citizen) gets a quota for their energy use for a whole year. This guarantees that you are entitled to a certain amount of energy. It is set on a 20 year budget. These progressively decline over 20 years. These are tradable. They are personal quotas. Companies can buy them in a market. But is is not primarily meant to be a tradable scheme, this is only an element of it.

There is more on this at http://www.teqs.net/

TEQs should be a national scheme with global impacts. Our own government should impose it.

Problems. The scheme is meant to be a way to smooth the transition to a low carbon lifestyle, but it may already be too late. The process could be speeded up – ie the reductions made more quickly, but maybe there is no time.

Tim Jackson says that none of these solutions add up to a macroeconomic model.

None of them are a macrosocial model. We aren’t living in an economy. We are living in a society. Economics is only a tiny aspect of our lives. This could be described as “Economic Fetishism”. We’ve been hammered into the idea of a market economy for the last 200years. But it hasn’t always been like that. Human beings are not simply agents of the economic model. But the market economy is a very powerful instrument and has these features:

Money. This is a relatively new invention. Coinage was invented in the 5th century BC, in Greece because, they had lots of mines. Money was a bit of a shock at the time. No previous societies had money. Pre-money societies had reciprocity. We don’t. These reciprocities become very complex in large societies. But they are a very “unlonely” way of living. So money engenders loneliness.

Aristophanes wrote an early economic tract (called?). The idea of heroism changed. Suddenly heroes didn’t exist. Thy used tyrants instead. Since then tyranny has never been shrugged off. Rome society was completely overrun by tyranny.

The classical world had a large scale nervous breakdown flowing the introduction of money. The population of England was “cut down like ripe corn” (quote from Bede?). They were not even able to afford Potters wheels.

5-15th century BC was a period without money. The management of the commons reached its apogee.

Second problem with market economy is that it is taut.

Thinking radically is difficult. The market economy has total control over our minds bodies and everything else.

The opposite of a taut economy is a slack economy. What is that? This would be an economy that could survive without growth.

The definition of a slack economy is that it produces less than its possible maximum output. This is very difficult to sustain. Prices are unspecified.

How has it been done in the past? One example. Culture and religion are often used to get people all pointing in the same direction and thinking the same way.

Plato asked how would we work if all wealth was held in the commons?

Culture only works on a very small scale. Needs a proper sense of group literacy.

Need to recognise the idea of sacrifice and succession. Some transitional communities will fail. Some will die.

Perfect Competition is an economic ideal. Can’t possibly exist. But is instructive to look at it. It is made up of seven axioms:

No intervention (i.e. can’t stop people building on graveyards).
All products are the same. (?)
Large number of buyers and sellers. So no individual can affect price.
Free entry and exit for all buyers and sellers.
Profit maximisation all firms are only designed to do this.
Perfect movement of all factors of production – land labour and capital.
Perfect knowledge. All consumers have good knowledge of what is in the market.

These are meant to be absurd, to only be used as a way of looking at things.

Commons only work if they are closed access commons.
Economics looks at the wrong variables in the wrong way.
It’s easy to be sucked into it.
But the basic principles are wrong.

The balance sheet we have inherited is a wasteland.
There is a human ecology waiting to be discovered.

The Spirit Level. By Kate Pickett and Richard Wilkinson was mentioned in one question. David didn’t seem very keen on it.

Filed under blackheath, green, politics, things to do

3 responses to “Prosperity without growth, in a tent on Blackheath”