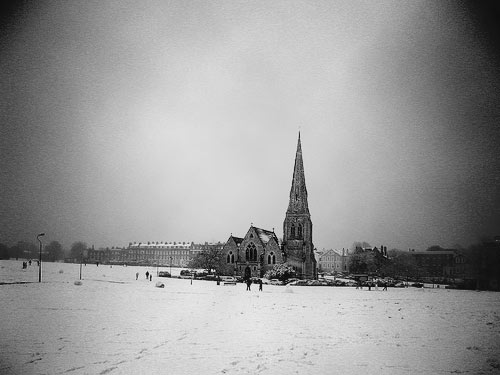 Below is an amazing recollection of Blackheath at the end of, and just after World War 2. Please click on the post to read the full piece.

It was written by Bob Land, who now lives in The Netherlands, but found this site, and (luckily for all of us) was willing to share his memories.  I think it’s great, and I urge you all to read it, especially to visualise the antics of the milk carts.  It makes picking up half a pint of semi-skimmed in Shepherd Foods seem incredibly dull in comparison.  Now, if we could only reinstate the bakery and the toy shop…

I was born in 1939, so my recollection of the war years are very limited.

One night looking out of the front bedroom window I saw a doodle bug passing overhead, on its way towards London, with its typical spluttering sound and flames coming out of the rear exhaust.

One day, around about midday, we were at school (All Saint’s), and there was a huge explosion, all the windows at the rear of the school fell out of their frames, I am led to believe, that this was the result of the flying bomb, which had a direct hit on the Weslyan Church in Blackheath Grove, although it is doubtful, that this was the cause.

On another occasion, towards the end of the war, there had been extensive damage to a few shops in Tranquil Vale, and having taken my Grandmother’s broom, I helped the Fire Brigade sweep up the glass which was lying on the pavement from all the shattered shop windows. I can still recall the smell of charred timbers, iodine and broken plaster board.

We spent many, many nights in the air-raid shelter in the garden, during the Blitz and later on with the V1 and V2 rockets

Just after the war, the summer of 1945 I was still at All Saint’s, we used to have “lessons” in the mornings, and in the afternoon we were put into bunk beds, to rest, presumably to catch up on all the sleep we had lost during the Blitz.

There were a flight of steps next to the school at the bottom of Blackheath Vale which led up onto the Heath, adjacent to the Hare & Billet Pond, we used to sometimes as a class go up these steps and play on the grass.

I remember there being some toys, pedal cars and the like, the older pupils used to push us toddlers around in them.

Winter in Blackheath
In those days, after the war, the winters always seemed to be harsh.

Walking across the heath on the narrow path from Tranquil Vale to Blackheath Vale, sometimes the snowdrifts used to be  more than knee high.

We used to go tobogganing in Greenwich Park, going at breakneck speed from the heights of General Wolfe’s Statue all the way downhill to the Naval College, then trudge all the way back up with the sledge in tow, to start all over again.

At the end of the afternoon, the long trek back home, across the Heath, the sun setting fast now, a huge red ball on the horizon, the temperature plummeting even further. Wet shoes and clothes, tired, but eagerly looking forward to tea, tobogganing gave a young lad a healthy appetite, in those days.

We also used to make “slides” when the Hare & Billet Pond was frozen, running down the embankment as fast as we could, once we reached the edge of pond, jumping onto the ice, placing both feet squarely in front of each other, and then “slide” across the Pond, in an endeavour to reach the other side.

Christmas in those days, was also a joy, the windows of Raggety Anne’s Toy Shop, in Osborne Place were like a magnet.

There used to be a large wooded area between Paragon Place and Pond Road, and on the other side of Pond Road was marshland. This was a delightful area for adventurous young boys, from playing Cowboys and Indians in the woods, to bird and nature spotting and catching newts in the marshes .

As Spring progressed, so an air of anticipation grew, the Easter Fair was on its way to Blackheath, at last the first few trailers and caravans arrived, and then it became a hive of activity, all the sideshows and main attractions seemed to be erected at breakneck speed.  At last, it was open, music blaring and lights blazing and masses of people milling around.

A delightful time of the year to be in Blackheath.

Thinking of it now, it seemed to be a time of never ending sunshine, the delightful smell of fresh mown grass after the Park’s Attendants had cut the grass with their tractor mowers all over the Heath.

Sitting on the grass, on a hot summers day, watching the then numerous skylarks hovering and twittering, before they dived earthwards, a wonderful sight.

On one day in the week, in the morning, we used to run up to Mrs. Coultate’s Newsagents Shop in Tranquil Vale (the little shop next to the Three Tuns Pub) to buy the Beano and Dandy comics, and then sit on a friend’s steps outside his house in Collins Street and read them. We often used to play Monopoly on the same steps, in the warm summer air.

On Sundays, the Princess of Wales Pond was a favourite, high powered model speedboats were raced there.

In those early days after the war, on very warm sunny afternoons, the Village seemed to be in “siesta” mode, there were very very few cars about and even even less people on the streets. In fact it was so quiet that if you stood on the forecourt of the The Crown Public House, or on the opposite side of the road, in front of the Corner Book Shop, and looked toward All Saint’s Parish Hall, you could not only see the house-martins flying to and from the nests under the eaves, you could hear them as well.

And on not so hot days, during the school summer holidays, we used to play football on the heath, with two coats spread out as goalposts… and cricket, with bat, ball and three stumps!

When it got dark, we all used to sit on the wooden seat at the top of Tranquil Vale, chin-wagging until it was time to go home.

It seemed that there was often mist or fog in early Autumn, some days the visibility was only a couple of yards, and it was so quiet, that you could often hear the foghorns of the tugs on the River Thames!

There used to be a large orchard where the John Ball School now stands, so this was a favourite place to go in late autumn, “scrumping” for apples, often being chased out of the orchard by the irate owners.

Late autumn was the time for gathering chestnuts and even more fun, “conkers” (wild chestnuts), soaking them overnight in vinegar, running a hole through them with a meat skewer and then threading a sturdy length of string through them and then to battle! It all seems pretty primitive now in these days of computer games and iPods.

Also in November, the excitement of Guy Fawkes Day, the bonfire was on the stretch of heath in front of the Royal Parade, later it moved to a piece of waste ground next to the Express Dairy in Wemyss Road.

There were many children with a Guy Fawkes Dummy out on the streets, apparently the best (and most lucrative) place to be was outside the railway station during the early evening rush hour.

Other moments or recollections
In those early years after the war, the Army sometimes camped on the heath,  on exercise.  There was always an atmosphere of axle-grease, oil and impregnated tents, the soldiers used to ask us for our old comics, I suppose those men were really just like us, very young boys at heart.

One traumatic moment was an accident with an Express Dairy milk float in the yard at Wemyss Road.  Apparently the horse reared and bolted in the yard with the float in tow, and then the horse jumped over the low rear wall at the back of the yard, which was a sheer drop down onto the bomb dump where the Wesleyan Church had been.  The float had not gone over the wall, but the horse had, and it was dangling in its reins and harnesses…  We saw the vet climb up a very long ladder, presumably to put the horse to sleep. We did not stay to watch this!

With regard to the Express Dairy Yard, in Wemyss Road, when you walked past it there was always a very pungent odour of horses, milk and straw. A more pleasant odour was that of fresh baked bread at the rear of Jobbins the Bakers in Bennett Park.

Another extraordinary sight, was the horse drawn Express Dairy milk float, negotiating the very short steep hill between Collins Street and South Vale.  The milkman used to get the horse into a canter halfway along Collins Street, take a very sharp right turn at the end and gallop up the short hill into South Vale, all accompanied by a cacophony of clattering of horses hooves on the road, the Milkman shouting encouragement to the horse and cracking his whip, together with the din of shaking milk bottles and crates on the float, this was all repeated a few yards later up the short steep hill from South Vale to Tranquil Vale. An amazing sight and sound.

Most of us did paper rounds, a couple of us worked for Mrs. Coultate, and a couple for another small newsagents in Montpelier Vale, but the creme de la creme were the lads who worked for W.H. Smiths at the railway station, they all had “company bicycles” – they were all painted red and had double pannier bags!  We had to use our own bikes and were given shoulder satchels .

In the early 1950’s a coffee-bar opened at the top of Tranquil Vale.  It was next door to the Corner Book Shop.  It had a juke-box and a regular clientele, and nothing ever happened there, but if you thought to yourself “I won’t go this evening,” you did anyway, because you were afraid you might miss something. But you never did…

Further down from the Coffee-Bar there was a restaurant named “El-Sombrero” (we called it “The Hat”).  They served delicious omelets.

I left Blackheath in 1958. I have been back a couple of times since then, and standing in the Village, looking all around me and then casting my mind back to those early years, it gave me a sense of satisfaction to have spent such a happy carefree childhood in such a pleasant place.

If you enjoyed this, can I again recommend reading “Blackheath Village and Environs

Volume 1 is in print, available from The Bookshop on the Heath, or from Amazon

Volume 2 is out of print, but can still be found second hand.

Photo based on this modern photo by littlestar19