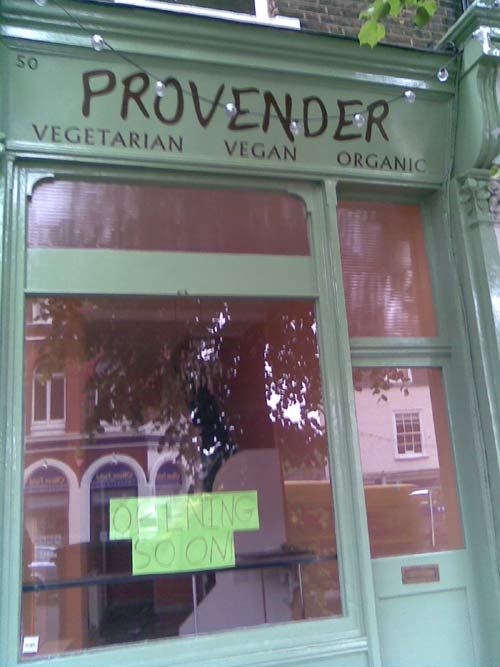 The mysterious shop front next to O’Neill’s pub finally has a sign painted above it, and it looks promising…

“Provender – Vegetarian Vegan Organic”. This encourages a vegetarian bugle! I hope it is as good as Food for Thought, or like a takeaway version of The Gate.

It looks like there is a Provender Delicatessen in Lewisham, so perhaps this is going to be a second outlet. Anyone been to the one in Lewisham? 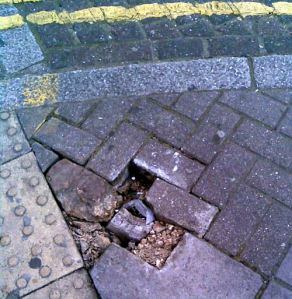 You may remember my post about the post. No sign of a fix yet. The post itself has disappeared, but the hole is still there. Hopefully the post won’t reappear through a shop window. A nice lady called Lisa has emailed me to tell me that she has told Greenwich council about it.

Next time you walk past it, remember, it isn’t a missing post, it is actually Service Request ID 175605.

This will be the last post (bugle joke) for a while, as The Bugle is going to get some sun for a couple of weeks. However, I’ve been working on a load of posts to keep you going over the coming days, which should hopefully get posted automatically, so stay tuned….

Films at the Reminiscence Centre

I’d been meaning to write about the Reminiscence Centre for a while now. This is a little gem opposite the station.

It is part of a charity that was set up to help elderly people deal with dementia and memory loss, and improving the quality of life for older people who may be at risk of social exclusion. I’m guessing that social exclusion is modern-speak for loneliness. Anyway, it’s a great idea, and is really nicely presented, as a shop from the 1930s with thousands of little pieces of memorabilia hidden away in sets of drawers, as well as a tea room and garden at the back.

I’m sure that if they set up a table or two at the front of the shop, their custom would increase dramatically, but driving in customers is not their main focus.

Behind the garden, there is a large building called The Old Bakehouse, which is used as a kind of community centre, theatre, and cinema. They are running a series of talks on Friday afternoons at 2pm about classic films, actors, and genres. It costs £3, including tea and cake.

I think it’s a great idea, and very in keeping with the traditions that were set up around the Art Club, and Literary Society that have since disappeared from Blackheath.